How do I configure multiple series?

What is the relationship between the series name in the configuration pane and the s field in the data pane? 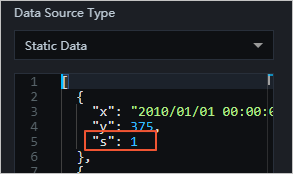