The mPaaS framework is suitable for teams to develop apps collaboratively, and the framework includes functions such as component initialization and embedding, so that you can easily access mPaaS components.

For example, in Alipay, a Bundle generally consists of a main module named app and the following three sub-modules:

After you read this topic, you will learn about the Bundle project from the following aspects:

Bundle is essentially a native project. Compared to a native project, a Bundle project has an additional Apply plug-in of mPaaS in the build.gradle of project**, main Module**, and sub-module. The specific differences are described as follows:

In build.gradle in the project root directory, the dependency on the mPaaS plug-in is added:

Note: Due to the iteration of functions, the plug-in version may continue to increase. 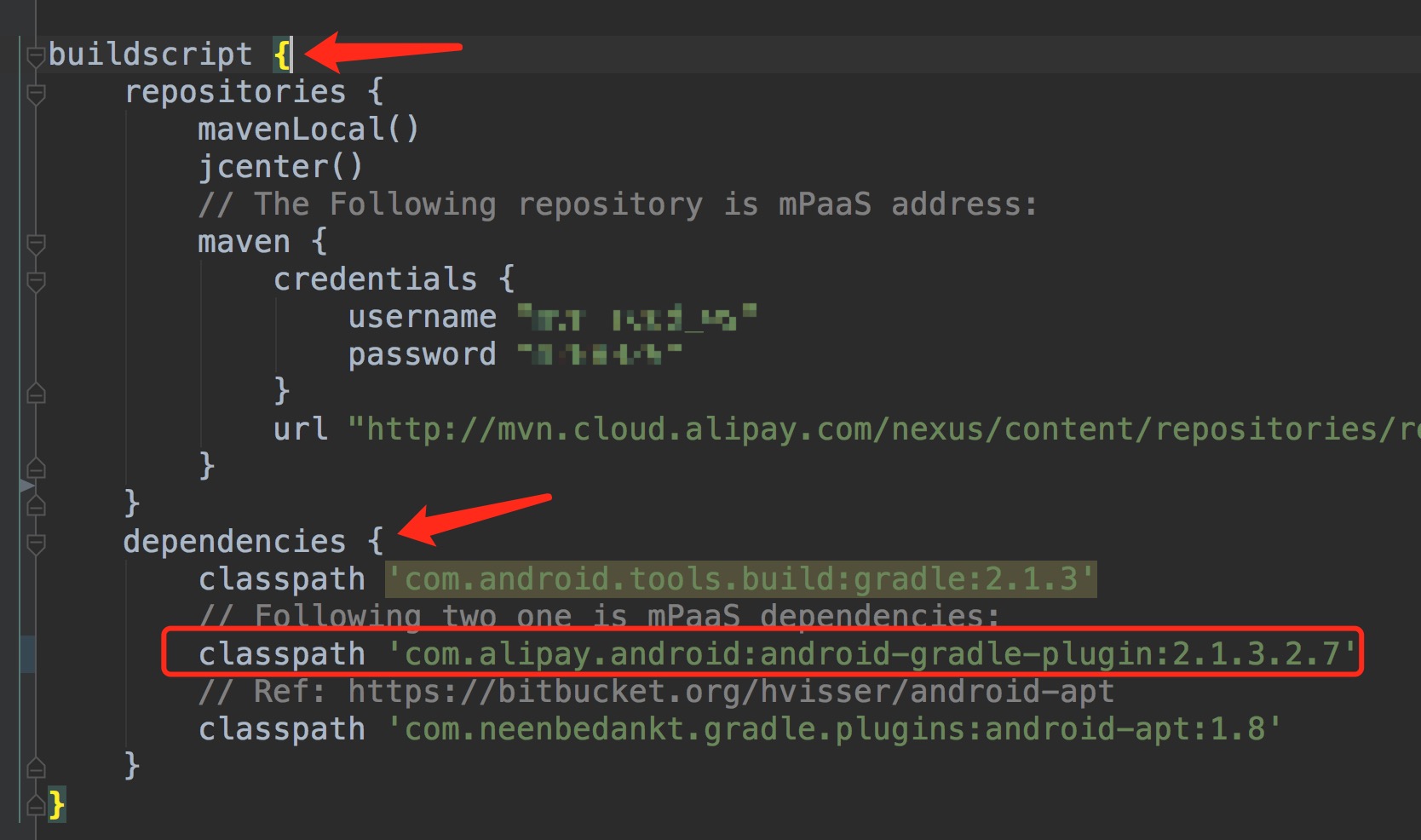 In build.gradle of the main module, a declaration of mPaaS bundle Apply plug-in is added. This indicates that the project is a Bundle project. The Bundle configuration is as follows:

The following configuration has been added to the main module build.gradle: 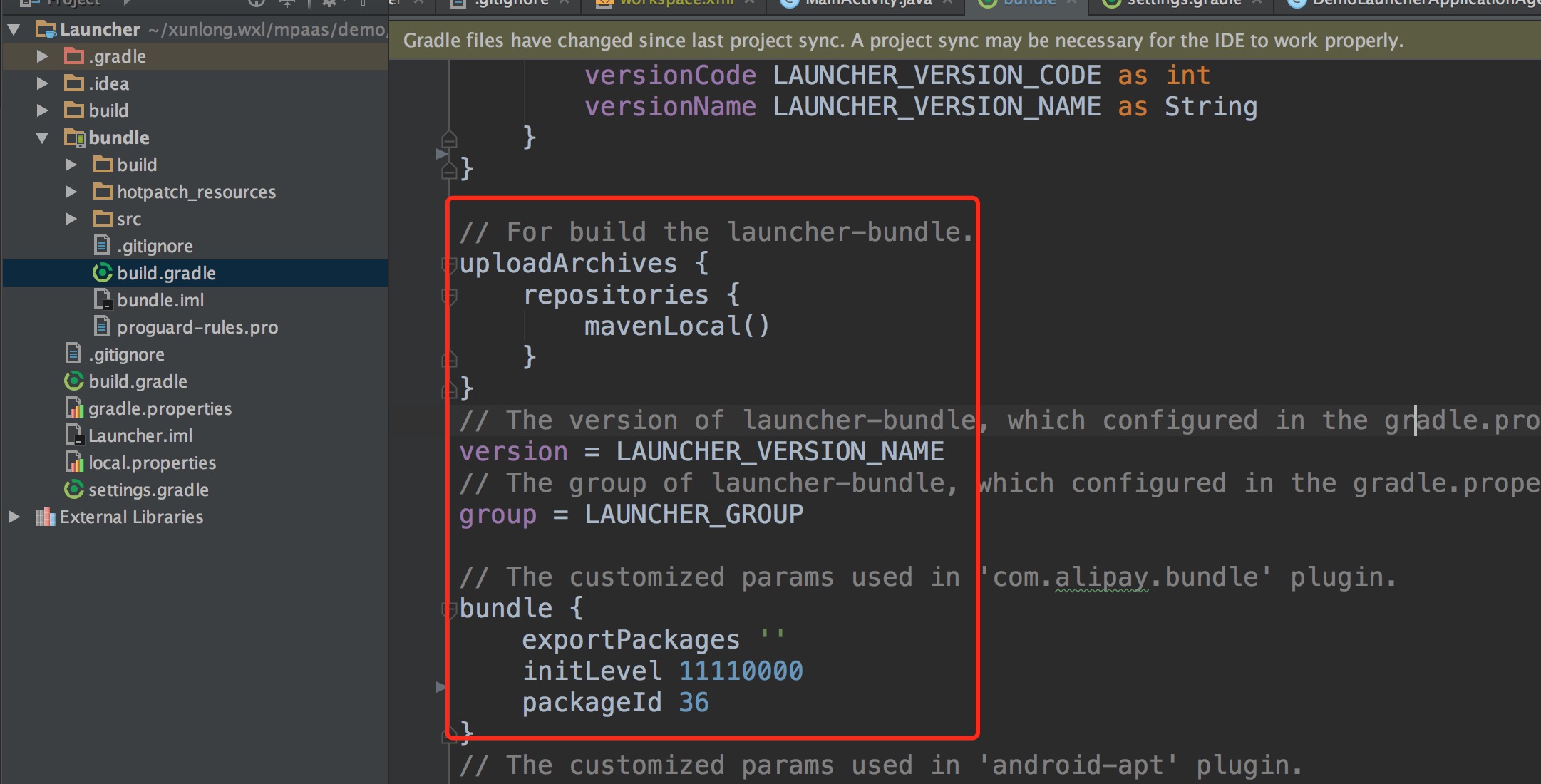 build.gradle of the sub-module

In build.gradle of the sub-module, a declaration of mPaaS Apply plug-in is added. This indicates that the project is a sub-module project of the Bundle, and the API package of this Bundle will eventually be packed.

The following table lists the Bundle properties and descriptions:

A Bundle may contain multiple sub-modules, such as biz, api, UI. When you compile and pack the Bundle, each sub-module will generate an interface package in the format of .jar. Among these packages, only the API interface packages can be used by other Bundles.

The Portal project merges all the Bundle project packages into a runnable .apk package.

The difference between Portal and traditional development projects is inbuild.gradle:

As shown in the following figure, the class path has an additional com.alipay.android:android-gradle-plugin:2.1.3.2.7 plug-in:

Note: Due to the iteration of functions, the plug-in version may continue to increase.

This plug-in contains the Portal plug-in, which can merge the Bundles during the packing process.

The declaration of mPaaS Apply Portal plug-in is added, which indicates that the project is a Portal project. The Portal configuration is as follows:

At the same time, add the corresponding dependency on Bundle in dependencies. The statements in dependencies are the declarations of Bundle and manifest, which are used to indicate which Bundles or manifests the Portal depends on:

An app based on the mPaaS framework includes one or more Bundles and a Portal. An app can have only one Portal project, but there can be multiple Bundle projects.

After the upload is completed, the Bundle is stored in the designated library in the form of groupid:artifactid:version:classifier@type. So, if you declare dependency in the build.gradle</>of the outermost main module of Portal, you can specify dependencies for each Bundle, as shown in the following code:

In addition, the interdependence between Bundle projects also needs to declare the library dependency address in the outermost build.gradle of the Bundle.

The project package will be published to the designated library in the form of groupid:artifactid:version:classifier@type. The release library address is defined in build.gradle in the Bundle main module as follows: