Alibaba Cloud Linux 3 is tuned to support Shared Memory Communications over RDMA (SMC-R). SMC-R is based on Alibaba Cloud eRDMA and can transparently replace TCP in applications without loss of functionality. SMC-R enables direct, high-speed, low-latency, and memory-to-memory communications and provides higher performance than TCP in various scenarios such as in-memory databases, remote procedure calls (RPCs), and transmission of large files. This topic describes SMC-R and how to work with it.

SMC-R is based on Remote Direct Memory Access (RDMA). Before you can understand SMC-R, you must understand what RDMA and Alibaba Cloud eRDMA are.

RDMA is a remote direct memory access technology that bypasses kernel intervention. It is widely used in data- and compute-intensive scenarios and is suitable for a wide array of fields such as high-performance computing, machine learning, data centers, and mass storage. RDMA underlies the core services of Alibaba Cloud, such as Enhanced SSD (ESSD) and PolarDB, and has been tried and tested in critical business scenarios such as Double 11. 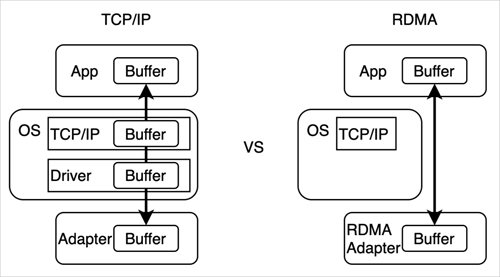 Previously, RDMA was used only with NICs and switches in some data centers and was complex to deploy. Alibaba Cloud eRDMA is a service that brings RDMA to the cloud for easy use, and allows Elastic Compute Service (ECS) users to use RDMA for data transmission without concerns about complex physical network environment configurations such as NICs and switches.

However, due to the great differences between the InfiniBand (IB) verbs interfaces used by RDMA and common POSIX socket interfaces, conventional applications must be significantly transformed before they can work with RDMA. Meanwhile, technical expertise is required to use IB verbs interfaces in an efficient manner.

SMC-R has the following benefits:

SMC-R is applicable to the following scenarios:

Alibaba Cloud Linux 3 provides a wide array of monitoring and maintenance tools for you to monitor the status of SMC-R and diagnose its issues. You can perform the following procedure to use SMC-R.