Alibaba Cloud API Gateway provides a mechanism for authorized access to your APIs based on a JSON Web Token (JWT). You can use this mechanism to customize security settings.

API Gateway verifies the identities of requesters who make API calls and determines whether to return requested resources to the requesters. Tokens are a mechanism used for identity authentication. Based on this mechanism, apps do not need to retain user authentication information or session information on the server side. This implements stateless and distributed web app authorization and facilitates app extension.

The preceding figure shows a procedure that is used to implement JWT-based authentication. Detailed procedure description:

JWT is an open standard (RFC 7519) that defines a compact and self-contained way to securely transmit information between parties. The information is encoded as a JSON object. A JWT can serve as an independent authentication token, which contains information such as the user ID, user role, and permissions, to help clients obtain resources from the resource server. A JWT can also provide additional claim information required for other business scenarios. This is suitable for logons in distributed sites.

As described in the preceding example, a JWT is a string that consists of the following parts:

The header consists of the following parts:

Example of a complete header in the JSON format:

The header is Base64 encoded to form the first part of the JWT. The header you encoded can be symmetrically decoded.

You can also add custom claims. In the following example, the name claim is added:

The payload is Base64 encoded to form the second part of the JWT.

The encryption algorithm specified in the header is used to encrypt the string that is composed of the Base64-encoded header and payload to form the third part of the JWT. The header and payload are concatenated by a period (.). $secret specifies a private key.

These three parts are concatenated by periods (.) to form a complete string. The JWT is formed.

In API Gateway, the issued token can be used to access all APIs that are bound to a JWT authentication plug-in in a specific API group. If fine-grained permission management is required, the backend service must verify the token for authentication. For the validity of a token, API Gateway checks the exp claim in the token in each API request. If the token has expired, API Gateway considers the token invalid and rejects the API request. You must specify a validity period for tokens. The validity period must be less than seven days.

1.3.4 Characteristics of a JWT

2. Use a JWT authentication plug-in to protect APIs

Visit https://mkjwk.org. Specify a private key and a public key that are used to generate and verify a JWT. The private key is used by an authentication server to issue a JWT. The public key is configured in a JWT authentication plug-in for API Gateway to verify the signature of requests. API Gateway supports the 2048-bit RSA SHA256 encryption algorithm for the key pair. 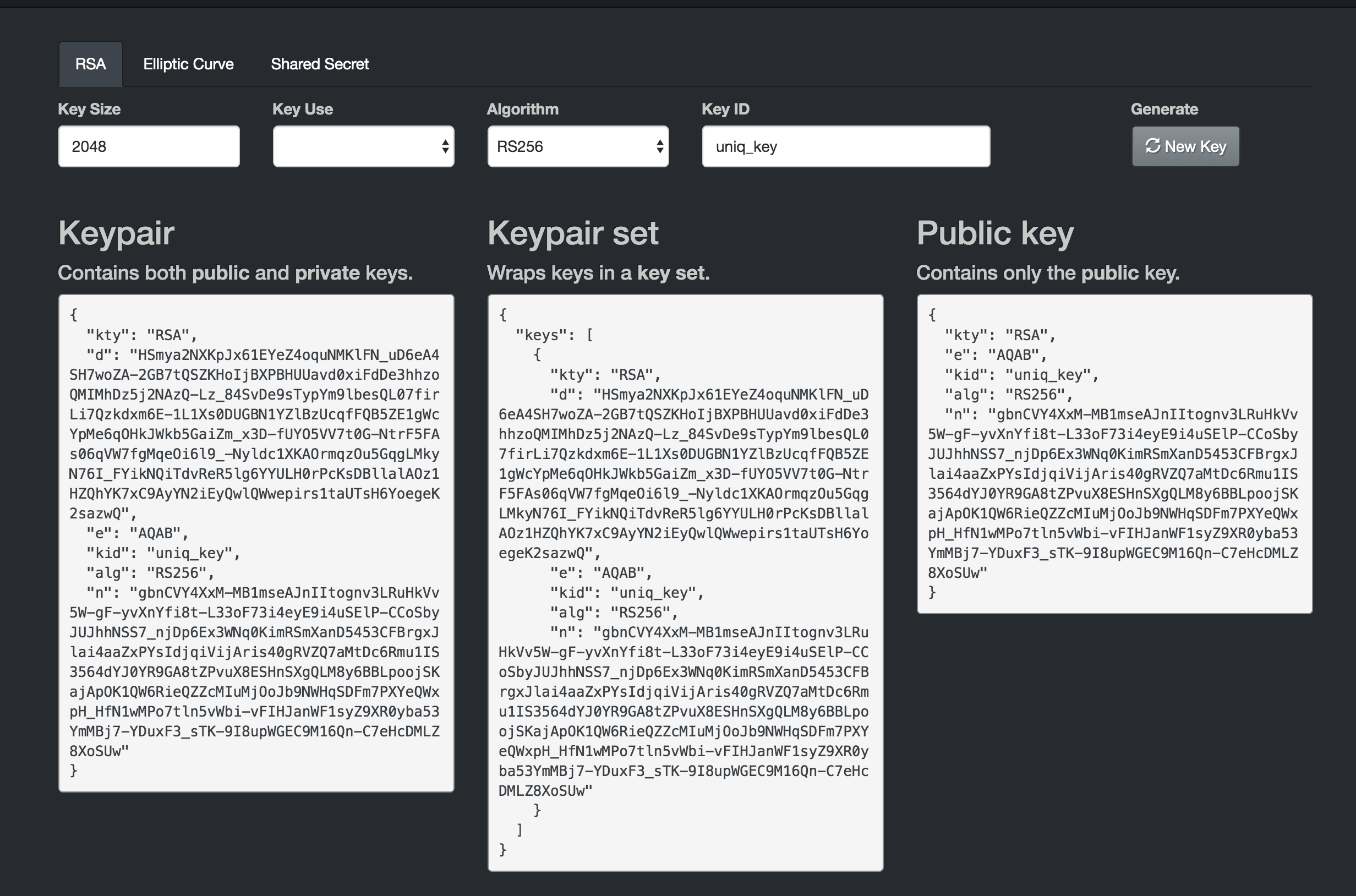 This topic provides a Java example. Create a Maven project and add the following dependency to the project:

Use the following code to generate an RSA key pair:

2.2 Use the private key in the JWK pair to issue a token

Use the Keypair JSON string that is generated by using method 1 or the privateKeyString JSON string that is generated by using method 2 as a private key to issue a token. The token is used to authorize trusted users to access protected APIs. For more information, see the example in the "Sample code for an authentication server to issue a token" section. The form of issuing a token is determined based on specific business requirements. You can deploy the token issuing feature to a production environment and configure a common API. Then, visitors can obtain the token by using a username and password. Alternatively, you can locally generate a token and copy the token for specific users.

2.3 Configure the public key in the JWK pair for a JWT authentication plug-in

On the Plugins list page, find the JWT authentication plug-in you created and click Bind API in the Operation column. In the Bind API dialog box, add the required APIs that are in specific API groups and published to specified environments to the Selected API(s) pane, and click OK.

If an HTTP response message includes an unexpected response code specified by ErrorCode in the X-Ca-Error-Code header, such as A403JT or I400JD, you can visit the jwt.io website to check the token validity and format.

4. Sample code for an authentication server to issue a token

Take note of the following items: