This topic describes how to create and publish an API with HTTP as the backend service type in API Gateway. This topic also describes how to call the API by using the AppKey and AppSecret pair of an app, with Security Certification set to Alibaba Cloud APP.

Log on to the API Gateway console. In the left-side navigation pane, choose Open API > API Groups. Select a region in the top navigation bar and click Create Group on the API Groups page. In the Create Group dialog box, select an instance to which the API group to be created belongs and enter a group name. In this example, set the Instance parameter to Shared Instance(VPC Network) and enter testAppkeyGroup in the Group Name field. 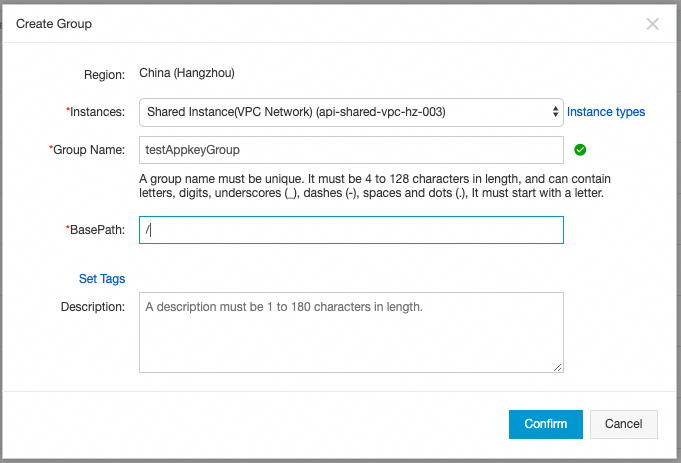 In the left-side navigation pane, choose Open API > APIs. Make sure that the current region is the region where the API group you created resides. On the APIs page, click Create API. 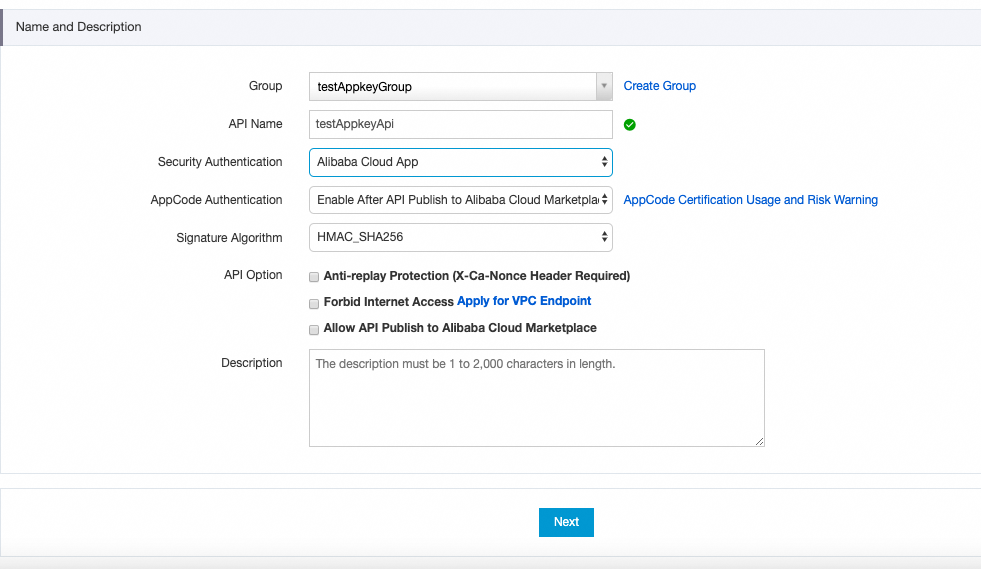 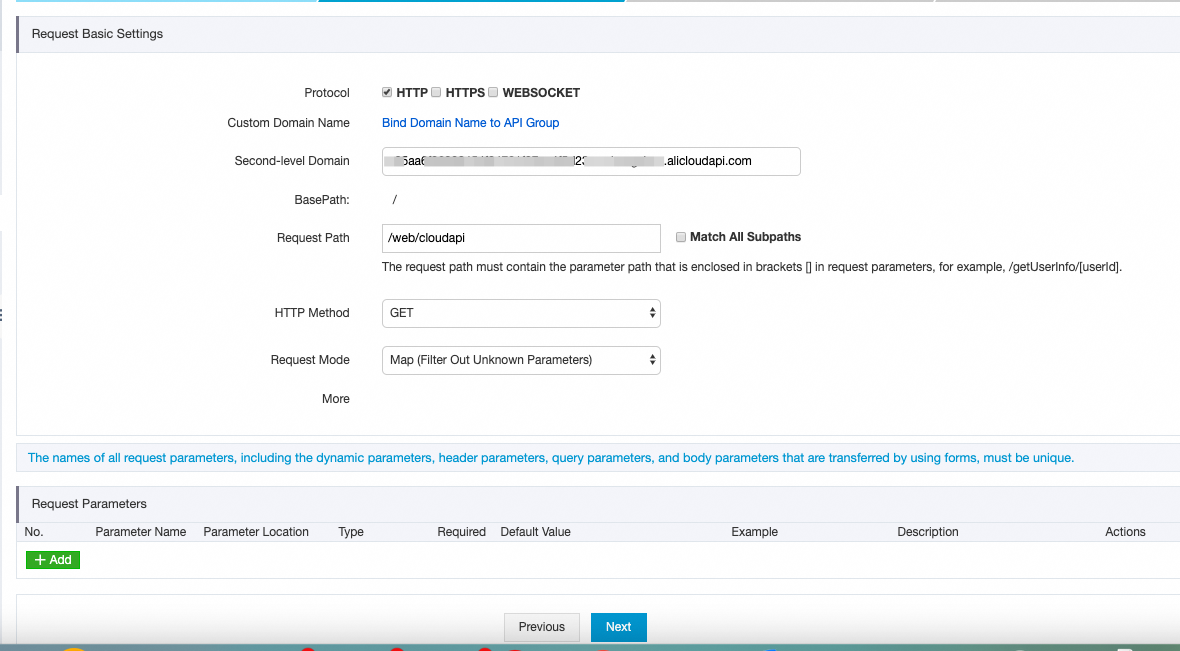 In this step, configure the type and URL of the backend service to which API Gateway sends the requests received from a client and how parameters are mapped and processed. In this example, set the Backend Service Type parameter to HTTP/HTTPS Service. The backend service address must be accessible on Alibaba Cloud networks and the Internet. For information about other backend service types, see API Gateway documentation. Configure other parameters such as Backend Request Path as prompted and click Next.

In this step, configure response information to generate API documentation. The documentation helps API callers better understand the API operation. You can set parameters such as Response ContentType, Response Example, and Error Response Example. In this example, this step is skipped. Click Create.

After you click Create, a message appears to inform you that the API operation is created, as shown in the following figure. API Gateway provides three environments to which you can publish an API operation: Production, Pre, and Test. All configurations you perform on an API operation can take effect only after you publish the API operation to a required environment. In this example, click Publish in the message that indicates successful API creation. In the Publish API dialog box, set the Stage parameter to Production, enter remarks, and then click Publish.

In the left-side navigation pane, choose Call API > Apps. On the Apps page, click Create App. In the Create App dialog box, enter an app name and click Confirm. In the app list, click the name of the created app. Two authentication modes are provided: an AppKey and AppSecret pair and AppCode. Each app has an AppKey and AppSecret pair. This pair works in a way similar to an account and password pair. When you call an API operation, you must pass in the AppKey as an input parameter. AppSecret is used to calculate the signature string. API Gateway authenticates the key pair to verify your identity. For more information about this mode, see Call an API operation by using an AppCode.

In the left-side navigation pane, choose Open API > APIs. On the APIs page, find the created API and choose More > Authorize in the Actions column. A dialog box appears, as shown in the following figure. Set the Stage parameter to the environment to which you have published the API operation. In this example, the Stage parameter is set to Production. Search for the app you created, click Add, and then click OK. A message appears to inform you that the app is authorized to call the API operation. 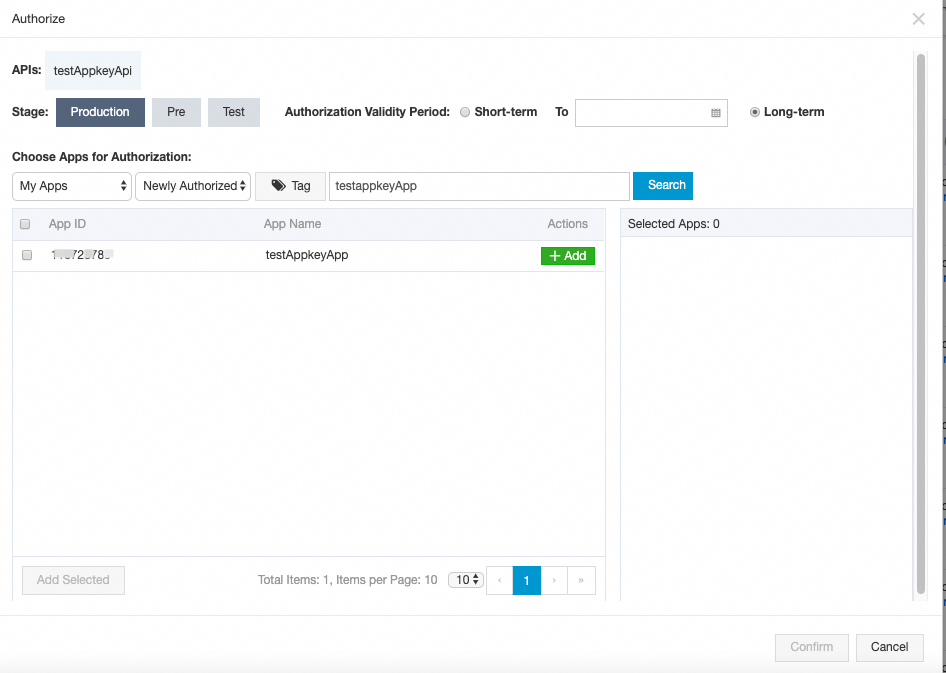 API Gateway supports online debugging. We recommend that you use this feature to check whether an API operation is correctly configured before you call this API operation on clients.

In the left-side navigation pane, choose Call API > Authorized API SDK. You can download the SDK that is used to call the API operation by using your app. You can also download the SDK for other coding languages.

2. Replace YOUR_APP_KEY and YOUR_APP_SECRET in the following code snippet with the AppKey and AppSecret of the app that is created in this example.

The following figure shows the result.

The following figure shows the result of an API call.