To handle the complexity of business, developers are starting to adopt agile development, continuous integration, and more modern approach. The system architecture is also phasing from large-scale software on single-machine into micro-service architecture. Micro-services are built on different datasets, while these software modules can be developed by different teams, implemented with different languages, or published to more than one servers. Therefore, if one service is in trouble, dozens of applications can be jeopardized.

The distributed tracing system can log all information in the requested scope, for example the execution process and time of a remote invocation of a method. It’s an important tool for us to troubleshoot the system and measure the system performance.

What is a trace?

Generally, a trace is the execution process of a transaction or process in the (distributed) system. According to OpenTracing standard, a trace is a Directed Acyclic Graph (DAG) that consists of multiple spans, where each span is a continuously executed fragment that gets named and timed in the trace.

Here is an example of distributed invocation: After being initialized by the Client, a request first reaches the load balancer, then calls the authentication service and billing service before requesting resources, and finally returns the result. 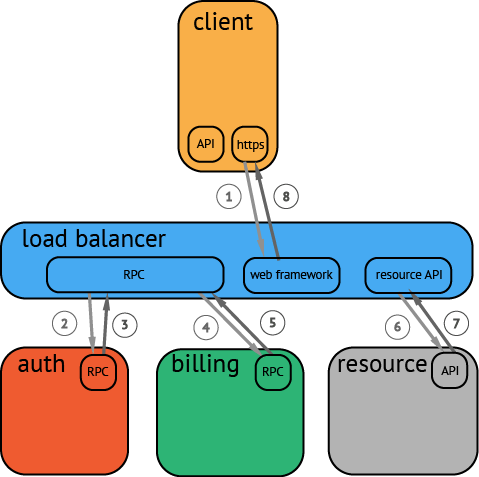 After the data is collected and stored, the distributed tracing system usually presents the trace with sequence diagrams containing a timeline.

A trace that complies with OpenTracing standard is defined implicitly with spans that belong to this trace. A trace can be deemed as a Directed Acyclic Graph (DAG) that consists of multiple spans. The relationship between spans is called References. For example, here is a trace that consists of eight spans.

In some cases, it’s better to present a trace with a sequence diagram based on timeline as follows.

How data is reported?

The workflow of reporting data directly without Agent is as shown in the following figure.

The workflow of reporting data through Agent is as shown in the following figure.

Previous: What is Tracing Analysis? Next: About overdue payments and service suspension