Normalization converts variable values into values between 0 and 1 based on input binning information, and sets missing values to 0. The following algorithm is used.

When variables are converted into dummy variables through discretization, the output table is in KV format and the output variable format is [${feaname}]\_bin\_${bin_id}. For example:

The scorecard is a modeling tool commonly used in credit risk evaluation. Scorecard training discretizes the original variables by binning input and uses a linear model (such as logistic regression and linear regression) to carry out model training. The scorecard supports various features, including feature selection and score conversion. In addition, you can add constraints to variables during model training.

Note: If no binning input is specified, scorecard training is completely equivalent to common logistic regression or linear regression.

Note: When using dummy variables for conversion, you can set constraints between dummy variables of each original variable. For more information, see the subsequent chapters.

In scorecard scenarios such as credit scoring, the odds of predicted samples must be transformed into scores by linear transformation, typically as follows:

Specify the linear transformation relationship by using the following parameters:

For example, if scaledValue is 800, odds is 50, and pdo is 25, the two points in a straight line are specified.

Support constraints in the training process

The following is a demonstration of binning component operations: 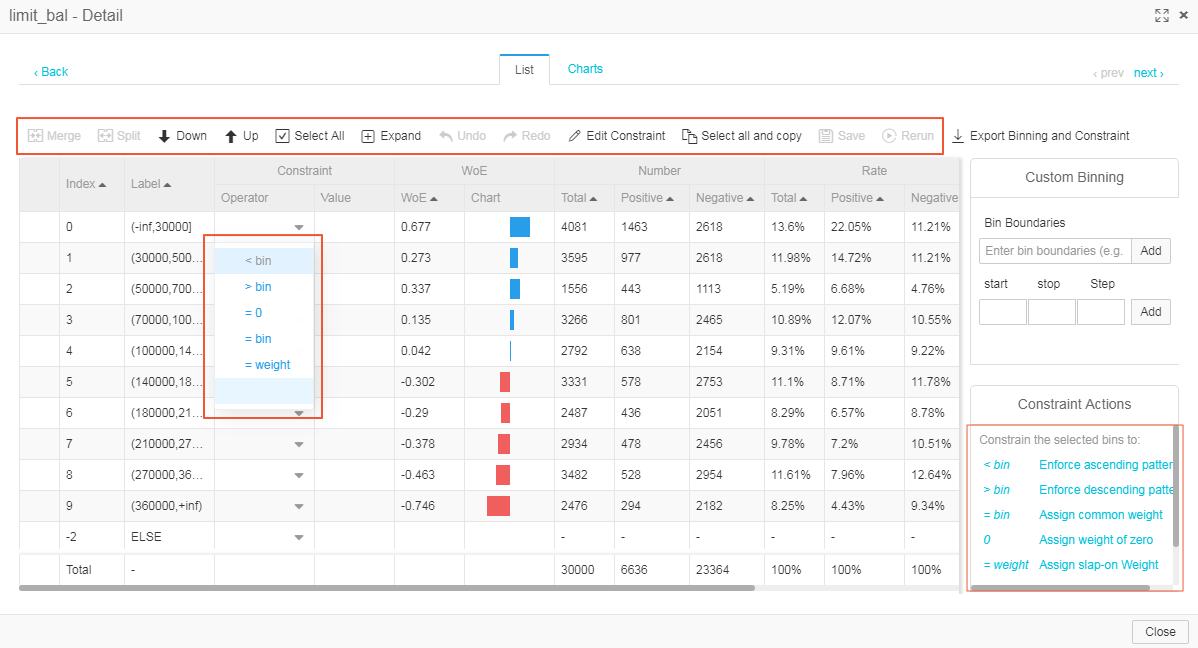 Notice: The score test is applicable only to feature selection of logistic regression.

The backward selection is performed on variables that have been selected to enter the model.

In the backward selection, the Wald Chi-Square and the significance P Value are calculated for variables that have entered the model.

Notice: The F test is applicable only to feature selection of linear regression.

Uses F Value to calculate the significance, and the process is similar to the score test.

The number of iterations and significance threshold are specified in CLI by using the -Dselected parameter in the JSON format:

If this parameter is null or max_step is “0”, normal training is performed without feature selection. 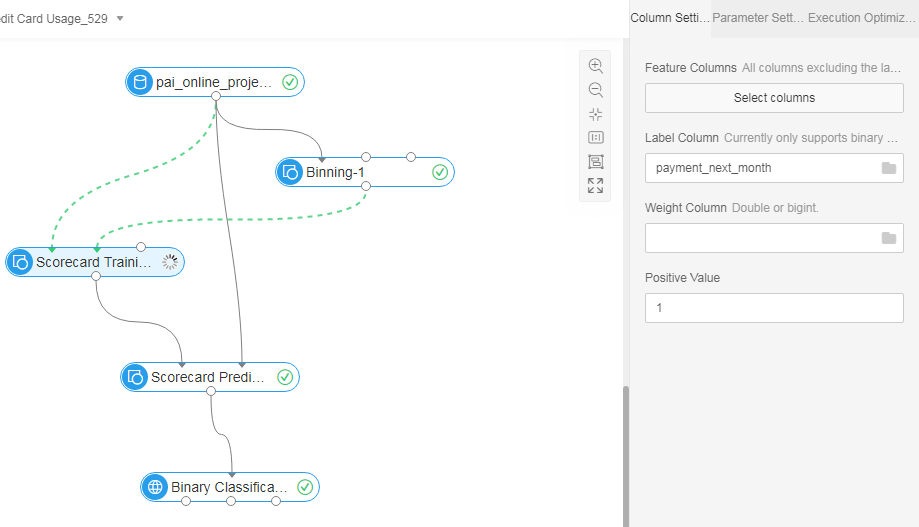 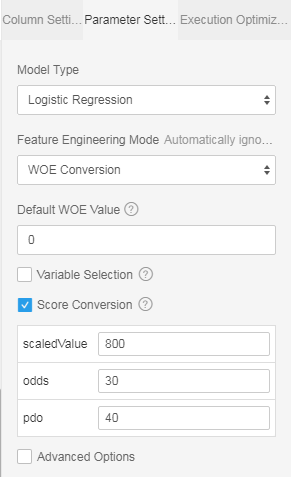 The related columns are described as follows:

The following is a simple demonstration of comparison between scorecard training and feature WOE conversion + logistic regression. 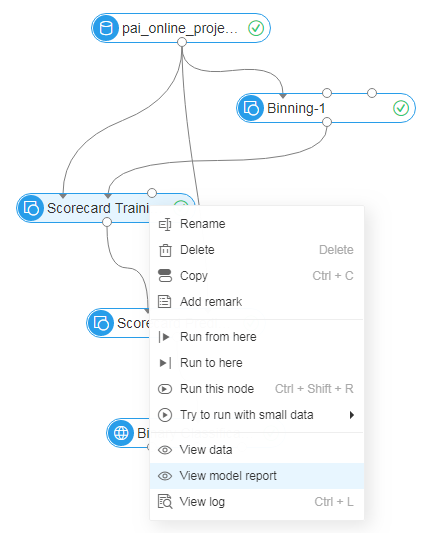 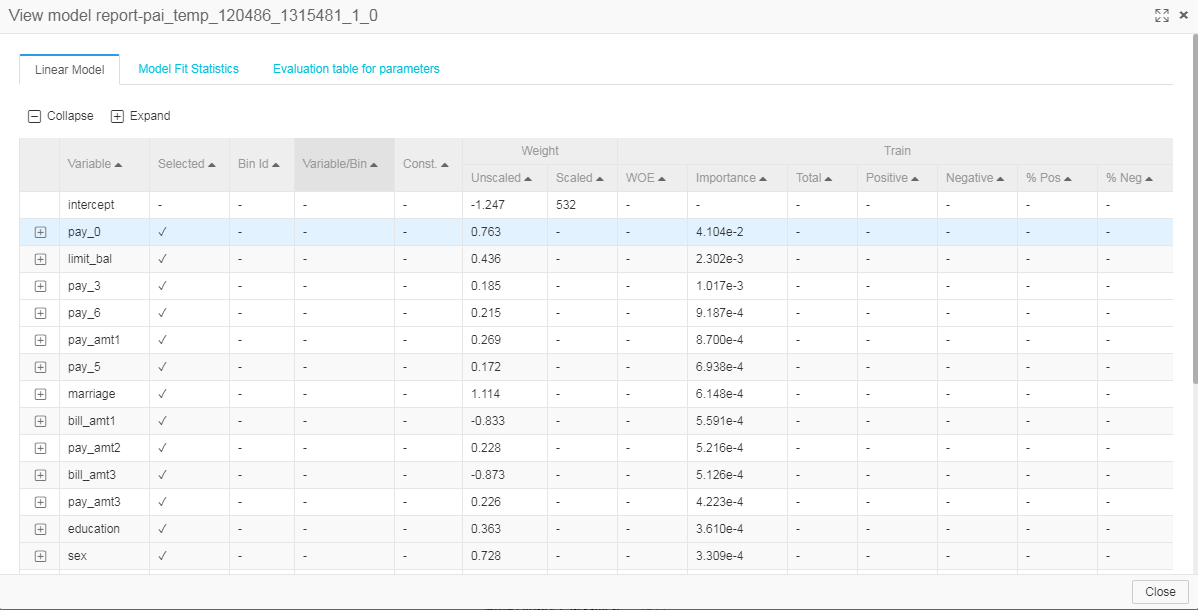 When the test set is connected to the input training component, the output model report shows statistical indicators of the model in the test set, such as WOE and MC. The following is a simple training demonstration of a test set: 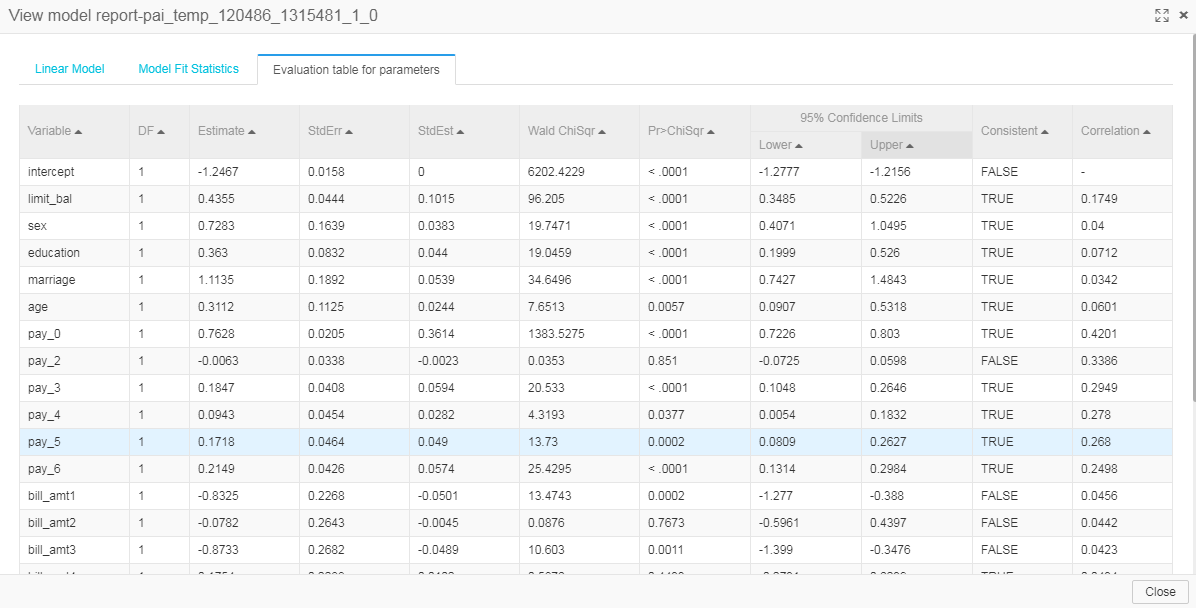 The following is an example of an output score table:

The population stability index (PSI) is an important indicator that measures the offset caused by sample changes. It is used to measure the sample stability, for example, whether a sample changes stably between two months.

Drawings can be used to check the sample stability. Discretize the variables to be compared into N bins, calculate the number and proportion of samples in each bin, and draw a histogram based on the data, as shown in the following figure. This method helps you intuitively check whether a certain variable has drastic changes in the two samples. However, this method cannot quantify the changes or automatically monitor the sample stability. Therefore, the PSI is particularly important. The feature data must be divided into bins before the PSI can be used. Therefore, a binning component is required. The PSI calculation formula is as follows:

Connect the two sample data sets and binning component with PSI component. And set the parameter of the PSI component, choose Feature for PSI Calculation, as shown in the following figure. 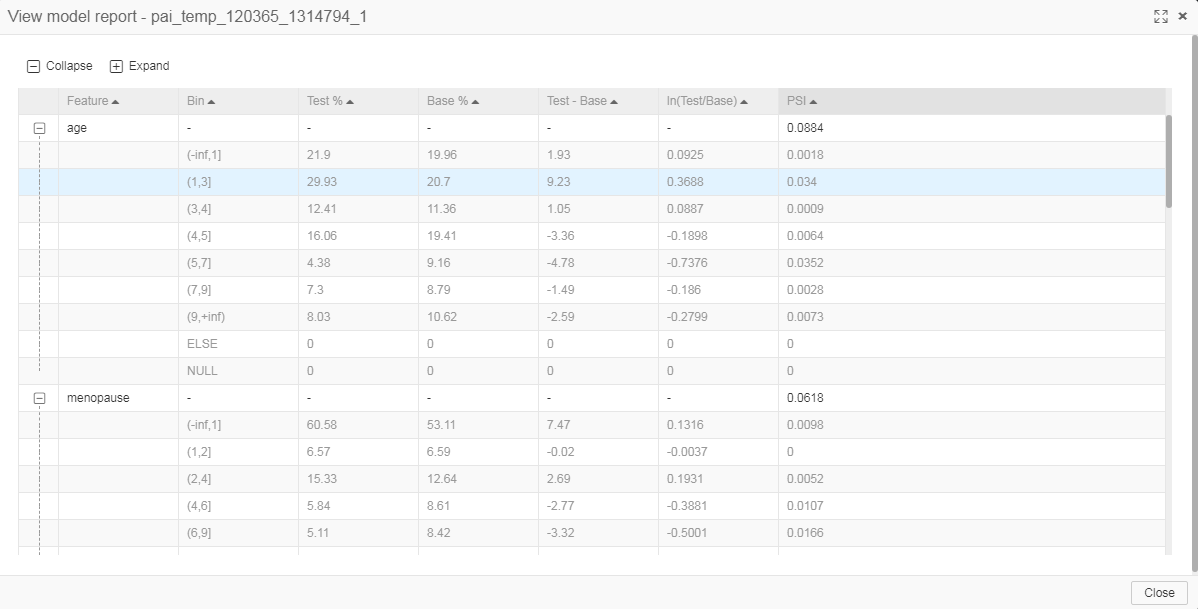