The following scenario is used to illustrate connecting office sites in the cities of Shanghai, Hangzhou, and Ningbo. Before you begin, make sure that you have obtained the public IP address of the gateway device for each office site. As shown in the following figure, to connect the three office sites (Shanghai, Hangzhou, and Ningbo), you only need to create a VPN Gateway and three customer gateways, and establish three IPsec-VPN connections.
Note Make sure the IP address ranges of all the connected sites do not conflict with each other. 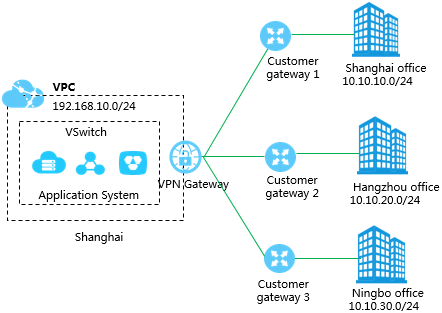 Create a VPN Gateway in the region to which the VPC belongs. Three IPsec-VPN connections will be established for the VPN Gateway and are connected to the office sites in Shanghai, Hangzhou, and Ningbo. For more information, see Create a VPN gateway.
Note Make sure that the IPsec-VPN function is enabled.

Step 2: Create an IPsec-VPN connection to the Shanghai office

Step 3: Create additional IPsec-VPN connections for the other two sites

Follow the same procedures in the Step 2 to create two IPsec connections for the Hangzhou office and the Ningbo office.

To configure the VPN Gateway route, follow these steps: