In ApsaraDB for Redis, whether in the master-replica edition or the cluster edition, replica serves as a standby database and does not provide external services. When high availability is enabled and the primary master fails, the replica can be promoted to the master to take over read and write operations. In this architecture, read and write requests are completed on the master node with high consistency, but the performance is limited by the number of master nodes. Often, even when the user data is small, the cluster specification still needs to be updated because the traffic and the concurrency is too high.

In business scenarios where there are more reads than writes, ApsaraDB for Redis provides a read/write splitting specification that is transparent, flexible, highly available, and high-performance. This specification helps users minimize the cost.

Redis cluster mode has several roles, including redis-proxy, Master, replica, and HA. In a read/write splitting instance, the read-only replica role is added to take over the read traffic. The replica serves as a hot standby and does not provide services. This architecture remains compatible with existing cluster specifications. The proxy forwards the read and write requests to the master node or a read-only replica accordingly by weight. The highly available (HA) cluster is responsible for monitoring the health status of nodes. When an exception occurs, the replica will take over or the read-only replica will be rebuilt to perform critical operations, and the route will be updated.

Typically, according to the data synchronization methods of master nodes and read-only replicas, there are two replication types: star replication and cascading replication.

In the star replication, data volumes are replicated on multiple nodes in parallel. Since the master node is connected to all other read-only replica nodes, there is no need to failover a replica node in the event of a failure thus reducing the duration of recovery. 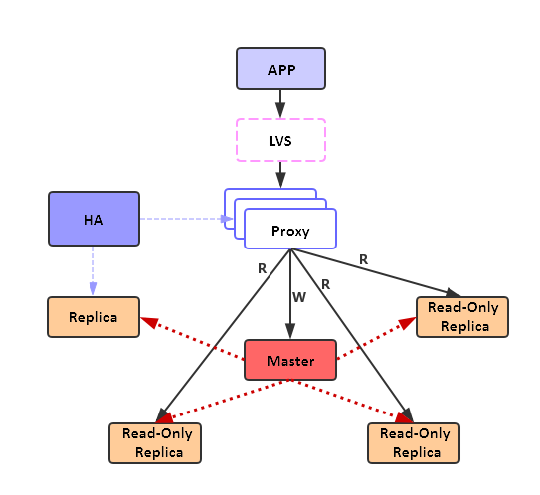 Cascading replication solves the extension problem of star replication. In theory, the number of read-only replicas can increase infinitely, and the performance of the entire cluster will increase accordingly.

In a chain replication, the longer the replication chain, the greater the delay between the original master node and the read-only replica at the end of the chain.This shortcoming is usually acceptable, since that the read/write splitting is mainly used in scenarios that have low requirements on consistency. However, if a node in the replication chain fails, all data on the downstream nodes will be delayed significantly. What's worse, this may lead to a full synchronization that is passed to the end of the replication chain, and reduce the service performance. To solve this problem, the Redis read/write splitting uses an optimized binlog replication provided by Alibaba Cloud to minimize the probability of full synchronization.

In light of the preceding discussions and comparisons, Redis chooses a cascading replication architecture for read/write splitting.

The user establishes a connection with redis-proxy, a Redis proxy that supports read/write splitting. The proxy recognizes whether the request sent by the client is read or write, and then performs load balancing according to the weight. The proxy forwards write requests to the master and read requests to the read-only replica. The master also supports read requests by default, which can be controlled by weight.

You can purchase instances of read/write splitting specifications and use them directly with any client, with no modification to the business. You can enjoy an improved service performance almost at no cost.

HA and redis_proxy work together to minimize the business awareness of backend exceptions and improve service availability.

In business scenarios where there are more reads than writes, using the cluster edition directly is not the best solution. The read/write splitting provides more options, and you can choose the best specification based on the business scenario to make full use of the read-only replicas.

The asynchronous replication of the Redis master-replica edition may read old data from the read-only replica, so read/write splitting feature requires the business to tolerate a certain degree of data inconsistency. The following editions will grant users more flexibility in parameter configurations, such as the allowed maximum delay time.