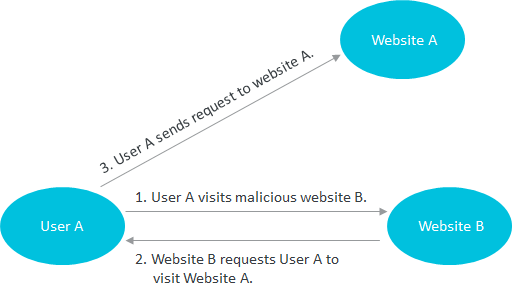 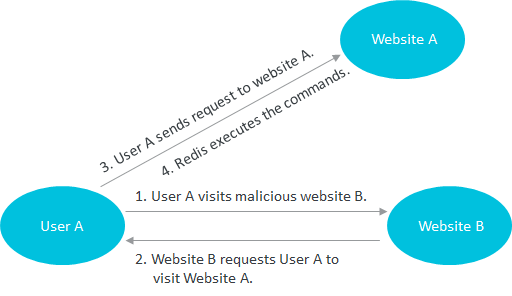 Based on the preceding principle of CSRF, a malicious website can require a user to send an HTTP request to Redis. Redis supports text protocols, and does not break off the connection in the case of illegal protocols during protocol parsing. An attacker can attach a Redis command to a normal HTTP request to run the command in Redis. If the user and Redis do not require password verification, Redis runs the command normally. Consequently, the attacker can encrypt data to extort money, similar to the earlier MongoDB ransom attacks.

Redis 3.2.7 provides a fix for this issue. The system processes the POST method and HOST keywords in a special way, keeps a log of events, and disconnects from the service to prevent Redis from running subsequent legitimate requests.

Earlier Redis versions have exposed a security vulnerability where an attacker can obtain the root permissions of the Redis service in a certain condition. Similar security vulnerabilities occur because some users know less about security mechanisms of Redis and have little experience of operations and maintenance for Redis. In addition, Redis lacks sufficient security protection mechanisms. However, the ApsaraDB for Redis service can provide more security mechanisms. We recommend that you use ApsaraDB for Redis as the Redis service in the cloud.

Security rules of ApsaraDB for Redis

Connections over an internal network instead of a public network

By default, ApsaraDB for Redis only supports trusted connections over the Alibaba Cloud intranet. Without applying for a public endpoint, your instance is not open to the Internet.

If you use a virtual private cloud (VPC) of Alibaba Cloud, only the services in the same VPC can interconnect with each other.

ApsaraDB for Redis supports whitelists. You can set a whitelist of IP addresses in the console to allow connections based on these IP addresses.

ApsaraDB for Redis isolates permissions and accessible directories for each backend instance. The instances can only access resources by using their own path to avoid mutual interference.

ApsaraDB for Redis forbids some dangerous system management commands such as CONFIG and SAVE. If you want to modify parameters, you must pass the secondary authentication in the console. This can also avoid direct operations of the backend configuration files and management commands.

Previous: What is the size of each database on an ApsaraDB for Redis instance and how can I choose databases? Next: How can I use the Redis command line interface (redis-cli) to import on-premises Redis data to ApsaraDB for Redis?