The MaxCompute compiler is based on the next-generation SQL engine called MaxCompute2.0, which dramatically enhances SQL. It makes the process of language compilation and the ability of language expression easier. This article introduces you to the enhanced uses of the compiler.

Compiler ease of use improvements

To fully demonstrate the ease-of-use improvements of the MaxCompute compiler, it is recommended that you use MaxCompute studio together.

First, install MaxCompute Studio by adding a MaxCompute project and creating a project, and then creating a new MaxCompute. The script is as follows:

So, follow the prompts to modify the errors and warnings as follows:

After the modification, submit the script again, and you can now run it smoothly.

You can also use MaxCompute studio to set all warnings as errors, as shown in the following figure: 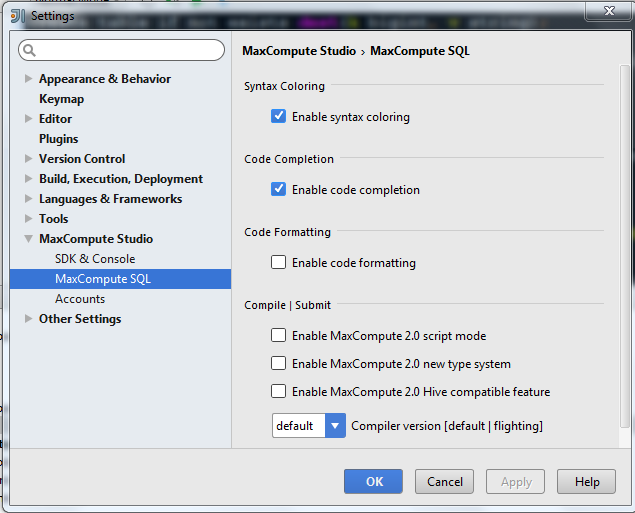 With the preceding settings, it is guaranteed that you won't accidentally miss out on any possible errors.

It is recommended that you use MaxCompute studio before submitting any scripts The script is checked for static compilation, and we strongly recommend that you set the warning as an error. Modify all warnings before you submit the script to save time and resources. In addition, when an error script is submitted, it is pushed to your calculation health score. This reduces the priority of the future tasks. Moreover, , future unmodified warnings also get incorporated into the health system. Meaning, the use of MaxCompute compiler and studio can never be degraded.