This topic describes how to set up an Object Storage Service (OSS)-based direct data transfer service for mobile apps and configure upload callback.

Set up direct data transfer for mobile apps describes how to set up an OSS-based direct data transfer service for a mobile app. After the OSS-based direct transfer service is set up for an Android or iOS app, a Security Token Service (STS) token is issued to an app user when the app user sends an upload request. However, the app user can use the STS token to upload data to OSS multiple times until the token becomes invalid. As a result, the app server cannot identify the data uploaded by the app user, which complicates data management for the app developers. To address this issue, OSS provides the upload callback feature. 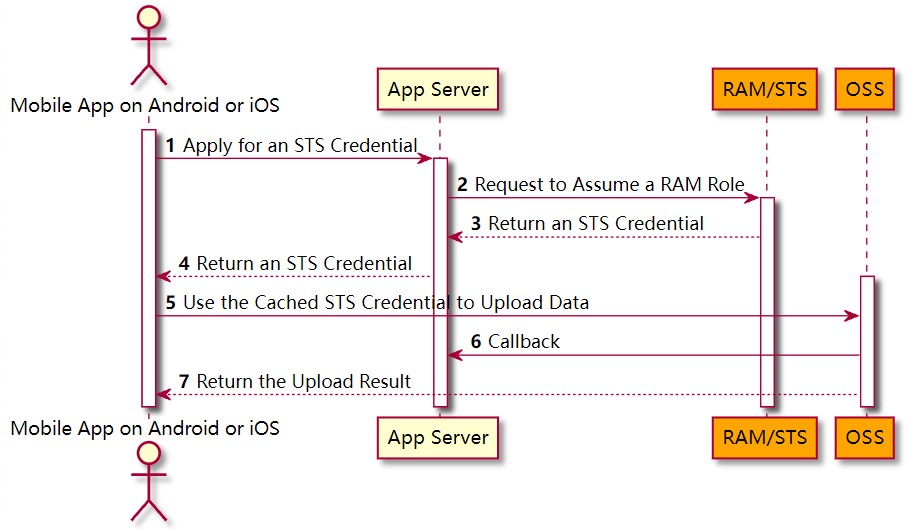 Requirements on the app server for upload callback

Configure upload callback requests on the mobile app side

Assume that you are an app developer, and the URL of the app server is http://abc.com/callback.php. You want to obtain the object name and size and specify x: phone as the mobile phone model and x:system as the operating system version.

If your app server is attacked and receives invalid requests, the app server needs to determine whether the callback request is sent from OSS.

OSS processes the response from the app server

One of the following scenarios may occur:

Previous: Set up direct data transfer for mobile apps Next: Use MaxCompute to build a data warehouse based on OSS