A raster is a grid that is formed by a matrix of cells (or pixels) that are organized into rows and columns. Each cell contains attribute values that represent the information for the area within the cell. These values are also known as raster data.

Raster data can be classified into two types: thematic data and image data.

DLA Ganos Raster is a spatio-temporal data engine and toolset. It is used to manage and process raster data. DLA Ganos Raster allows you to use ApsaraDB for HBase Enhanced Edition (Lindorm) to store, index, query, analyze, and transmit raster data and related metadata. Raster data is stored in ApsaraDB for HBase Enhanced Edition (Lindorm) as tiles or blocks. A primary key is assigned to each tile or block. You can perform spatial and temporal queries based on the primary key. DLA Ganos Raster also allows you to integrate and analyze raster data from multiple sources, such as remote sensing, photogrammetry, and thematic maps. It also supports data service release features such as the Tile Map Service (TMS) and Web Map Tile Service (WMTS). DLA Ganos Raster can be used in fields such as location-based services, geographic image archiving, environmental monitoring and assessment, geological engineering and exploration, natural resource management, national defense, emergency response, telecommunications, transportation, urban planning, and national security.

The data model of DLA Ganos Raster consists of the following elements:

DLA Ganos Raster uses a simple and efficient raster data model. This data model is used to manage the thematic data and remote sensing image data. An image consists of several bands that can be represented as a 2D raster layer. Each pixel of a band is represented as a cell. DLA Ganos Raster requires that all cells in each band be of the same data type and have the same projection parameters. This makes it easy for you to store and manage data. Note that different bands of an image can be heterogeneous. Each image has its own metadata. The metadata includes the extent, data types, projection information, row numbers, and column numbers. Raster data is stored as layers in databases. Each layer is stored and managed as a tile in DLA Ganos Raster. Tiles can be classified into two types: single-band tiles and multi-band tiles. Each multi-band tile contains multiple tiles.

The preceding figure shows the three types of relationships between the band and layer. 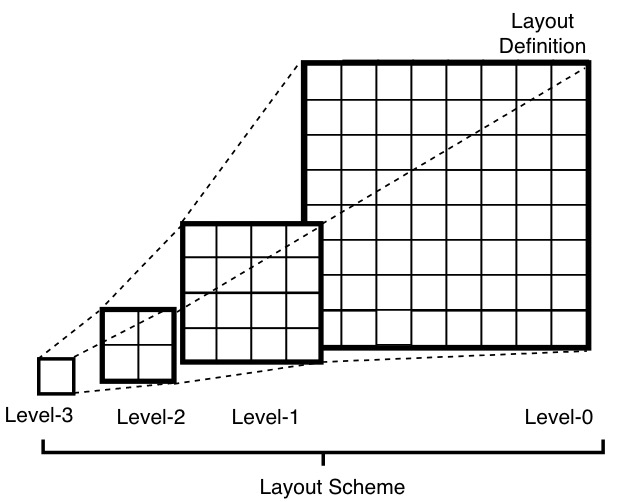 Pyramids speed up the display of the raster data by retrieving only the data at a specific resolution. The resolution varies with the display requirement. If you draw an entire dataset, you can use a pyramid to display tiles or blocks of lower resolutions. As you zoom in, levels with higher resolutions are drawn. However, the performance remains unchanged. The database automatically chooses the best-suited pyramid level for you based on your display scale. After you build pyramids for each raster dataset at a time, these pyramids are accessed each time you view the raster dataset. It requires more time to build a set of pyramids for a larger raster dataset. This also saves you more time in the future.

The layout definition and layout scheme are used to define the data chunking mode of each layer. If you specify the extent and cell size (the actual spatial range defined by a cell), the layout scheme can provide the zoom levels and the layout definition of each level. DLA Ganos Raster supports two modes for data chunking: zoom and local. In zoom mode, data within the globe is chunked and encoded in compliance with the TMS standard. The tile in the upper-left corner is defined as the starting point (0,0). The coordinates increase from left to right and top to bottom. All types of raster data are chunked into tiles based on spatio-temporal grids. This makes it easy for the accumulable analytics and multivariate data fusion. In compliance with the TMS standard, tiles chunked by this mode can be rendered and then published to TMS for display. For example, you can use the OpenLayers component after publishing. However, the speed of data chunking is slow in this mode. The following figure shows tiles in zoom mode. 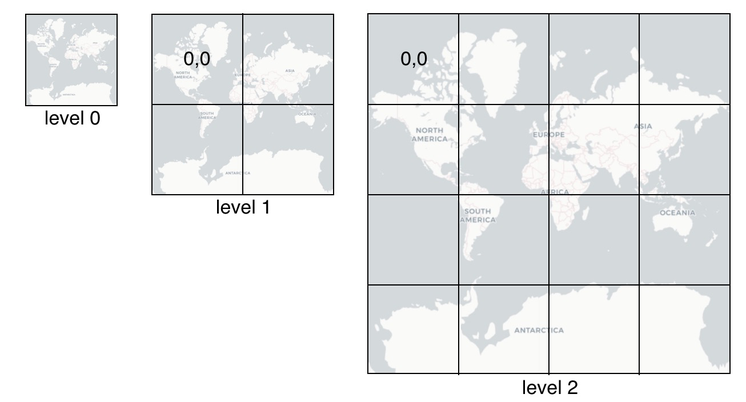 In addition to the zoom mode, DLA Ganos Raster also provides the local mode that is based on the local coordinate system of the image. In local mode, the upper-left corner of the extent is defined as the starting point (0,0). Then the data is chunked into tiles of 256 × 256 pixels until these tiles completely cover the image area. The remaining pixels are filled with NoData values. The benefit of this mode is that layer 0 uses the resolution of the raw dataset, which retains the original metadata. The local mode speeds up the data chunking, and helps you update the image and perform efficient queries. In this mode, different raster data does not use a uniform method to chunk data. This makes it difficult for accumulable analytics. By default, DLA Ganos Raster uses the local mode to chunk data and create pyramids. 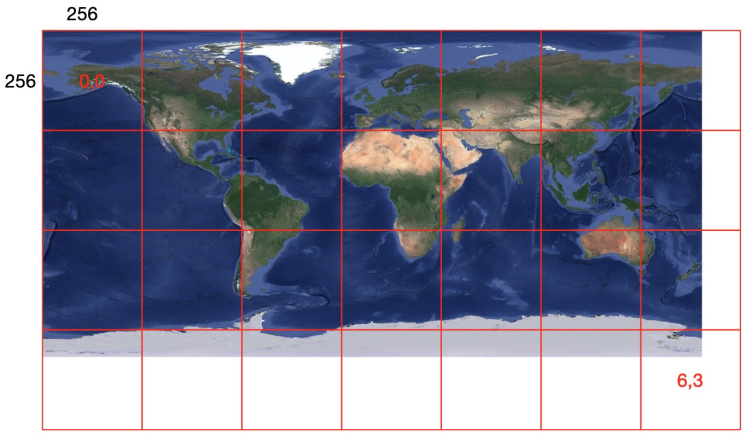 For more information about the EPSG parameters, see https://epsg.io/.

After the raster data is chunked into tiles, you must define how they are organized so that you can create indexes for them. Tiles are stored as key-value pairs in ApsaraDB for HBase Enhanced Edition (Lindorm). The key of each tile consists of attributes such as the layer name, level, SpaceTimeKey, row number, and column number. Ganos Raster of ApsaraDB for HBase Enhanced Edition (Lindorm) provides two key models:

In DLA Ganos Raster, a tile is the basic unit that is used to process raster data. The serverless Spark engine loads all raster data by using TileUDT, as shown in the following figure.