This topic describes how to establish network communication between cloud resources deployed on Alibaba Cloud and Amazon Web Services (AWS).

Before you start, make sure that the following requirements are met:

SAG vCPE is an image that can be deployed on cloud instances. You can deploy the SAG vCPE image on an Alibaba Cloud Edge Node Service (ENS) instance or an AWS instance. After the image is deployed on an instance, the instance functions as a virtual client-premises equipment (CPE) device. This allows you to connect private networks to Alibaba Cloud in a more flexible way. 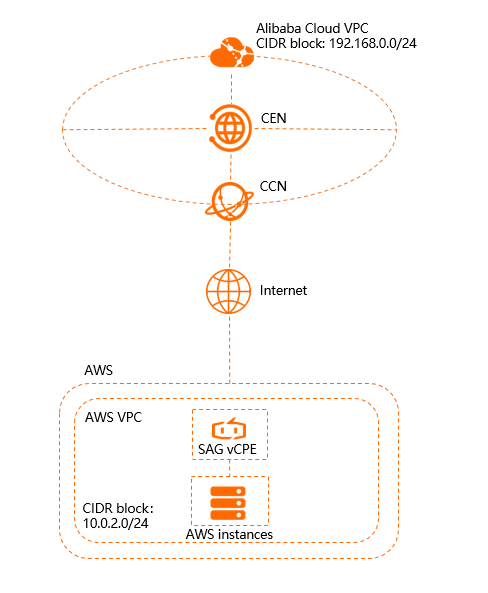 To establish network communication between cloud resources deployed on Alibaba Cloud and AWS, you must create an instance in the AWS VPC. Then, you can deploy the SAG vCPE image on the newly created instance. After you deploy the image, AWS can be connected to Alibaba Cloud through the AWS SAG vCPE instance.

For more information about how to create an instance in the AWS VPC, see relevant documentations provided by AWS. When you create an AWS VPC instance, note that:

Step 3: Configure the networks of the SAG vCPE device