Use ALS to predict ratings of songs

Many people will visit a movie recommendation website to check the rating of a movie before they watch it. After they watch a movie, they will also assign a rating to the movie. Everyone has a rating system in their mind. The rating of a commodity, song, or movie reflects whether the user likes or dislikes it. If a content provider can estimate the ratings to be assigned by its users, it can understand its users in a better way and then make more precise recommendations. This topic describes how to use Alternating Least Square (ALS), a factorization algorithm, to predict the ratings of a song or movie assigned by users.

In this topic, we use music rating as an example to introduce how ALS works. The source dataset, Matrix A, contains the ratings of songs assigned by all listeners. The ratings may be sparse because not every listener has listened to all the songs in the library and not all the songs are rated by every listener.

ALS factorizes Matrix A to the product of the transposes of Matrix X and Matrix Y.

Now we create an experiment in Alibaba Cloud PAI based on the preceding ALS use case. The experiment consists of the input data and ALS components. You can find the template of this use case on the Home page of PAI Studio. 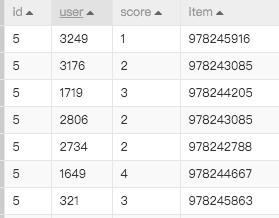 You must specify the fields as shown in the following figure. In this experiment, two tables are output, which correspond to Matrix X and Matrix Y described in the ALS introduction.

The Matrix X table is as follows.

The Matrix Y table is as follows.

To predict the rating of item 994556636 made by user1, you only need to multiply the following vectors together.