This topic describes how to deploy a Smart Access Gateway (SAG) device in one-arm mode and enable static routing to connect the private networks of headquarters or office branches to Alibaba Cloud. 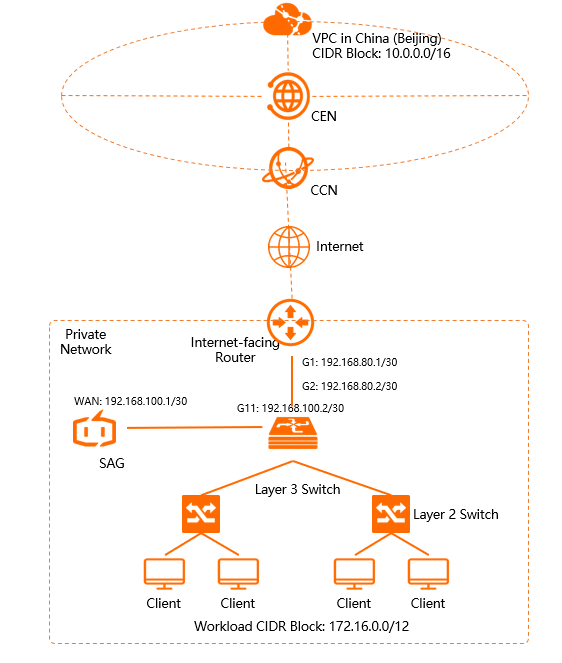 The following CIDR blocks are used in this example. When you allocate CIDR blocks based on your actual requirements, make sure that the CIDR blocks do not overlap with each other.

After you place an order in the SAG console, Alibaba Cloud delivers the SAG device to the specified address and creates an SAG instance to facilitate the management of the device.

Note If the area where the SAG device is used is outside mainland China, you must purchase the device from a third-party vendor that is authorized by Alibaba Cloud. For more information, see Purchase an SAG device.

You can check whether the order has been placed on the Smart Access Gateway page. After the order is placed, it will be shipped within two business days. If your order is not shipped as expected, you can submit a ticket to query the shipping status.

After you receive the SAG device, check whether you have received all the accessories. For more information, see Descriptions of an SAG-1000 device.

Before you begin, make sure that the device is activated, the 4G network works as expected, and the device is connected to Alibaba Cloud.

In this step, you must configure the peer switch and Internet-facing router for the SAG device. Switches and routers used in this example may be different from yours. For more information, see the manuals issued by your providers.

After you configure the SAG device, you must set up network connections to connect the private network to Alibaba Cloud.

After you complete the configurations in the preceding steps, access cloud resources deployed in the VPC network from a client in your private network to test the connectivity.