Log on to the API Gateway console. In the left-side navigation pane, choose Publish APIs > API Groups. Select a region in the top navigation bar and click Create Group on the Group List page. In the Create Group dialog box, select an instance to which the API group to be created belongs and enter a group name. In this example, set the Instance parameter to Shared Instance(VPC Network)(api-shared-vpc-001) and enter testAppkeyGroup in the Group Name field.

After you create the API group, the API group appears on the Group List page. You can click the group name to go to the details page, where you can perform operations such as binding a domain name, modifying basic information, and changing the instance type.

In the left-side navigation pane, choose Publish APIs > APIs. Make sure that the current region is the same region where the API group you created resides. On the API List page, click Create API. 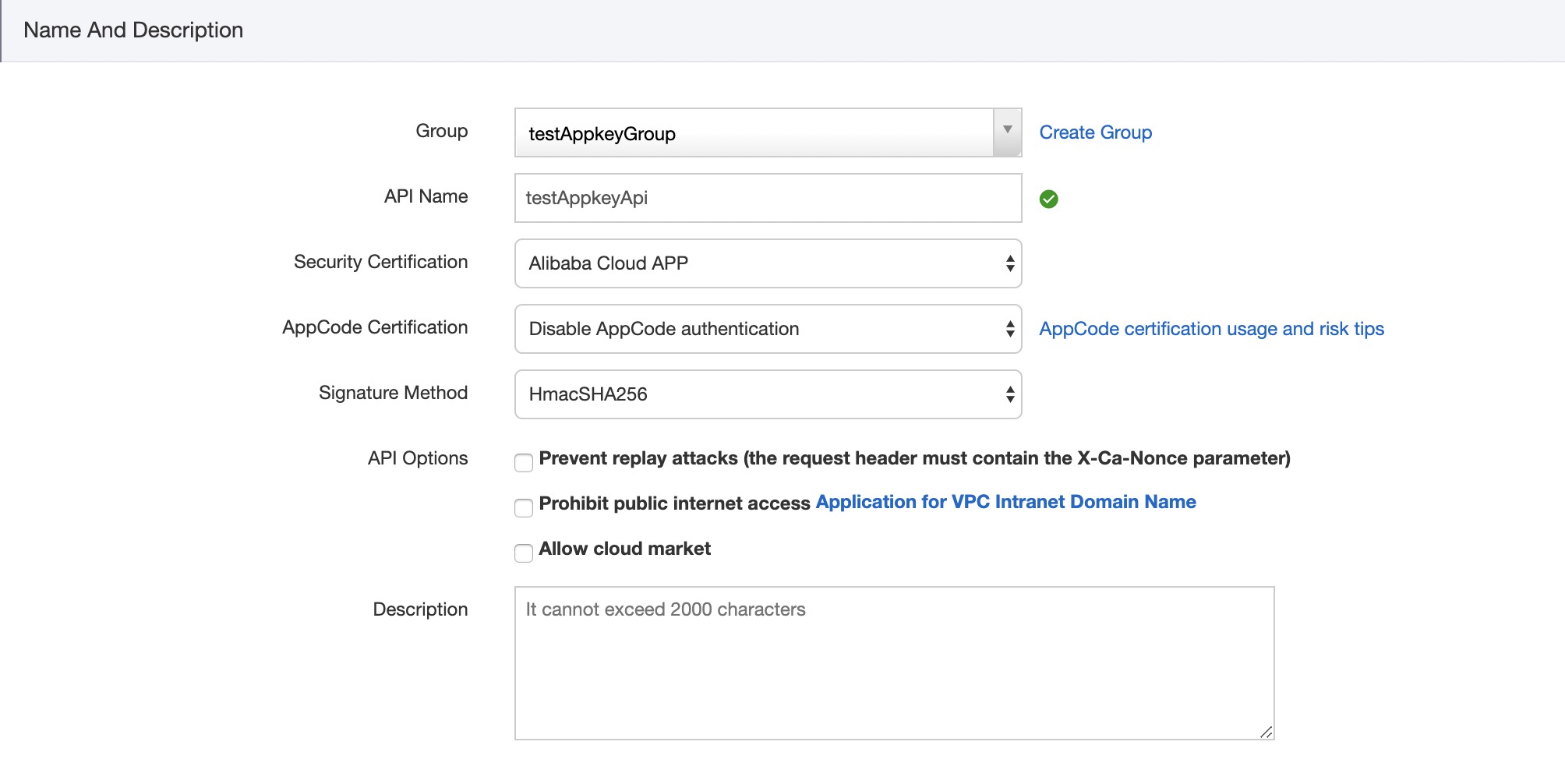 In this step, define how a client, such as a browser, a mobile app, or a business system, sends a request for the API operation. The parameters to be set in this step include Request Type, Protocol, Request Path, HTTP Method, Request Mode, and those in the Input Parameter Definition section. In this example, enter /web/cloudapi in the Request Path field and do not define request parameters.

Applications are identities that you use to call API operations. In step 3, the Security Certification parameter is set to Alibaba Cloud APP. Therefore, after you publish the API operation, you must create and authorize an application for calling the API operation.

In the left-side navigation pane, choose Consume APIs > APPs. On the APP List page, click Create APP. As shown in the following figure, for an API operation whose Security Certification parameter is set to Alibaba Cloud APP, two authentication modes are provided for its applications: AppKey and AppCode. The AppKey mode provides a key pair that consists of an AppKey and an AppSecret. You can regard them as an account and a password. When you call the API operation, you must specify the AppKey as a request parameter. The AppSecret is used to calculate the signature string. API Gateway authenticates the key pair to verify your identity. For more information about the Alibaba Cloud APP authentication method, see Call an API operation by using an AppCode.

In the left-side navigation pane, choose Publish APIs > APIs. On the API List page, find the API operation you created and click Authorize in the Operation column. A dialog box appears, as shown in the following figure. Set the Select The Stage For Authorization parameter to the environment to which you have published the API operation. In this example, set this parameter to Release. Search for the application you created, click Add, and then click OK. A message appears to inform you that the application is authorized to call the API operation. 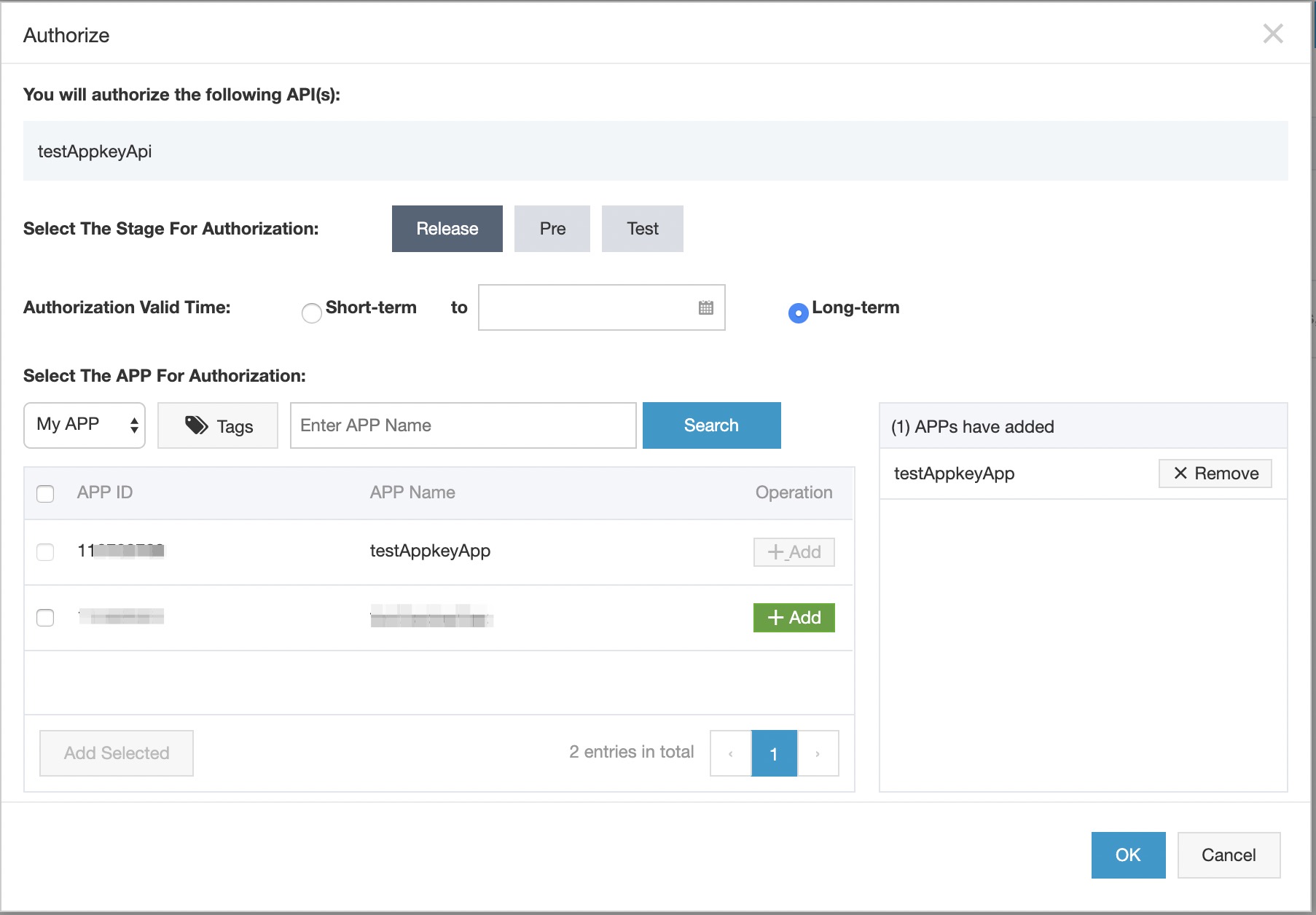 API Gateway supports online debugging. We recommend that you use this feature to check whether an API operation is correctly configured before you allow it to be called on clients.

2. Replace YOUR_APP_KEY and YOUR_APP_SECRET in the following code snippet with the AppKey and AppSecret of the application that is created in this example.