1.The Alibaba Cloud CSG console supports HTTPS. NFS and SMB require specific ports. You must open these ports in the firewall or security group.

1.Version 1.0.32 and later support AD and LDAP. You need to configure ports for these services: AD, LDAP, DNS, and Kerberos. You can configure ports by using the following methods: 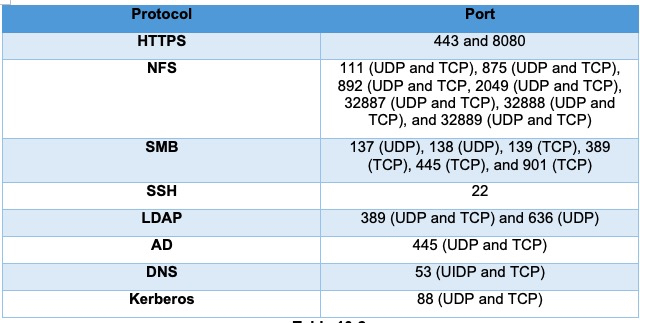 2.The preview version allows you to create one Enhanced gateway, two Standard gateways, and four Basic gateways under each Alibaba Cloud account. This limit applies to all gateway specifications. Only whitelisted users can create Performance gateways.

3.During the preview stage, the cache disk capacity that you can add for gateways with versions earlier than 1.0.35 are determined by the gateway specification. Version 1.0.35 and later allow you to add cache disks with custom capacities in the Alibaba Cloud CSG console（<8192GB）.

After the 1.0.35 version, the newly created gateway no longer comes with the default cache. You need to manually add the cache disk in the Alibaba Cloud CSG console.

4.The synchronization bandwidth of a gateway is determined by the OSS bandwidth. Currently, OSS provides a maximum bandwidth of 10 Gbit/s. The bandwidth of an OSS cluster varies depending on the region. For more information, consult Alibaba Cloud customer service.

6.When the number of files stored in the OSS bucket reaches one million, we recommend that you specify an interval longer than 3,600 seconds for the Enable Remote Sync feature.

7.Version 1.0.36 and later automatically specify a MIME type in the OSS metadata based on the file suffix.

8.When the Enable Remote Sync parameter is set to Yes, local empty directories that are not uploaded to Alibaba Cloud may be deleted by the Remote Sync progress during a scanning cycle. You can solve this issue by creating the directories again.

9.By default, the upload bandwidth of gateways deployed on Alibaba Cloud is 5 Mbit/s. These gateways access OSS buckets across regions through their public IP addresses. The data transmission quality and speed cannot be guaranteed.

Next: What is CSG?