This topic provides solutions for common problems that you may come across while you are using LiveChannel.

Push a stream to OSS LiveChannel 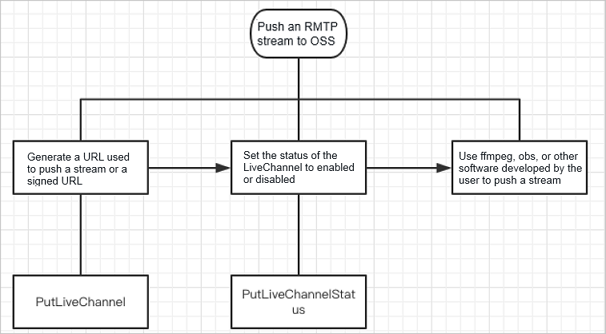 Problem: The generated m3u8 file only contains the last 3 ts files by default. The m3u8 file conforms to the default rules of the HLS protocol.

Solution: Use PostVodPlaylist to converge the ts files generated in the specified time period into a m3u8 index file.
Note

Problem: The m3u8 file is not successfully generated until the audio or video data is completely uploaded to OSS.

Solution: You can capture packets at the client side to check whether the "publish success" message is included, which indicates that the audio or video data is completely uploaded to OSS. If the message is included but the m3u8 file is not generated, you can analyze the packets sent from the client for root causes.

Case 3: The client cannot push a stream to OSS

Problem: The client fails to use ffmpeg to push a stream:
Solution:

Case 4: Lag problems occur when the m3u8 file is generated.

If the value of Type is HLS, when the duration of the video or audio data in the current ts file reaches the value of FragDuration, OSS generates a new ts file when receiving the next key frame. If OSS does not receive the next key frame with in a time period (calculated by max(2*FragDuration, 60s)), a new ts file is generated, which results lag in audio or video playing.

Case 5: No audio or video data is included in the generated m3u8 file.

This problem may be caused by the following reasons:

Case 6: The data upload to OSS by ffmpeg does not include audio data.

Previous: GetVodPlaylist Next: Migrate data between buckets in OSS