Your Guide to Efficient Re-rendering with React

21,377 1
A React component translates raw data into rich HTML. You can control the state of the component by changing its props and state. 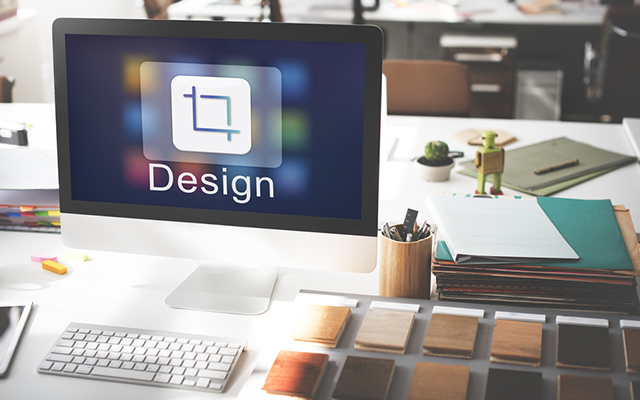 First, let’s understand the process of re-rendering in React. A React component translates raw data (consisting of props and state) into rich HTML. You can control the state of the component by changing its props and state. The entire component is re-rendered whenever its props/state change.

Steps for re-rendering in React: 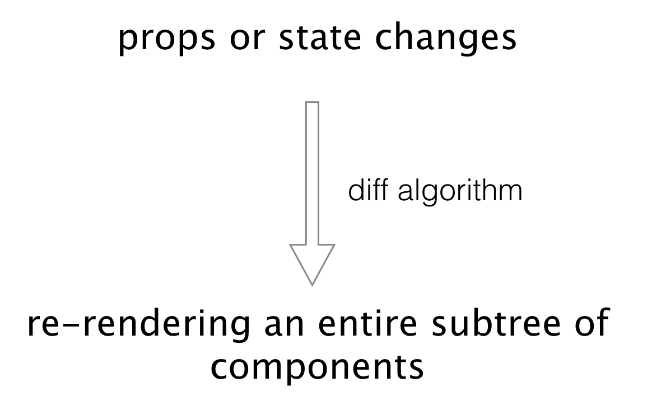 The DOM operation is very time-consuming. To improve the performance of components, try to minimize unnecessary re-rendering of them.

As the state of the component changes, the green node is re-rendered.

It is logical to think that only three nodes (highlighted in green) need to be updated to complete the component change.

However, as per React’s updating rules, whenever the props or state of a component change, the entire component is re-rendered. So, apart from the three green nodes, all other nodes (highlighted in yellow) are also re-rendered.

This is a huge waste of performance. For complex pages, this results in a very sub-standard user-experience. Therefore, to improve component performance, it is imperative to minimize unnecessary rendering.

Due to the need for minimizing unnecessary rendering, let’s look at some techniques for component optimization.

The function, shouldComponentUpdate, runs before rendering. Its return value determines whether the component is re-rendered.

The position of the shouldComponentUpdate function during component re-rendering is as shown in the following figure. 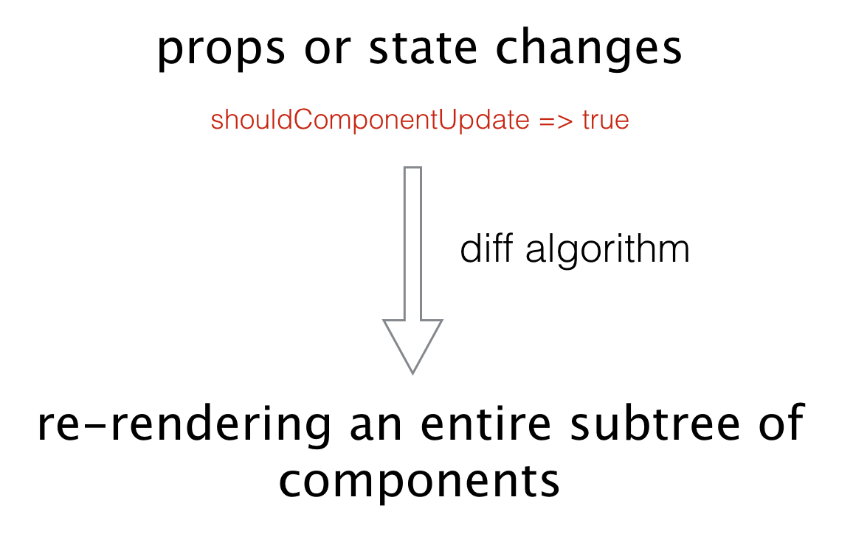 React provides the official PureRenderMixin plugin, which makes the shouldComponentUpdate function return False. The plugin can reduce unnecessary re-rendering and improve performance to a certain extent. The use of the plugin is as follows:

From the source code, you can see that the plugin is overwriting the shouldComponentUpdate function.

It compares the changes of props/state of the component. In the latest version of React, the basic class of React.PureComponent is provided, and the PureRenderMixin plugin is no longer needed.

To change the color of the component to blue, the following code is run.

The state comparison between two simple objects is depicted as:

If the two objects compared are complex, such as dates, functions, or objects with multiple nested layers, then the comparisons are either very time-consuming or unavailable.

You can overwrite the shouldComponentUpdate function to make it applicable to any item (including deep comparison/comparison of recursive layers). Deep comparison is time-consuming and hence not recommended. You should try to use simple props and state as well as avoid unnecessary attributes (or attributes calculated by other attributes in the state).

The comparison of complex data is time-consuming or unavailable in React. But Immutable.js can solve this problem. It returns the same reference for immutable objects and returns a new reference for changed objects. The following code is used for comparison of the state.

Consider a component, such as a table.

This is a scrollable table. The offsetTop represents the distance of visible area from the upper border of a browser. When the mouse scrolls, the value changes, altering the props of the component. Subsequently, the component is re-rendered.
Now, consider the following code.

By separating the changed and unchanged attributes, re-rendering is reduced, and performance improves. At the same time, the components can be easily separated and reused.


In nested multi-layer and complex components, there are many sub-nodes. So, component updates take longer, making the component difficult to maintain. The unidirectional flow of information from parent component to child component may lead to loss of control over the components.


Children components that need to be re-rendered are recognized using the shouldComponentUpdate function by checking if the children and parent components are identical or not. Children is an attribute of props, so it is same all of the time. In theory, the component is not to be re-rendered. But in practice, it is re-rendered every time.

Let’s look at the structure of children in the following code.

Children are relatively complex objects and re-constructed during each component update. In other words, children are dynamically constructed, so the update is not equal every time. As a result, shouldComponentUpdate returns True every time, and the component is re-rendered. We can replace children with a variable in order for the same object to be constructed every time.

The shouldComponentUpdate function returns False, and the component doesn’t change with outside state changes. This is because the components TargetContainer and BudgetContainer did not get any information from their parent element, and the children and the parent component are isolated. In fact, TwoColumnSplit plays the role of isolation. For components that do not need to get data from the outside, you can isolate them from external changes by returning a False value to reduce re-rendering.

You can also isolate external changes by using component containers. A container is a data layer, with the component responsible for rendering corresponding components based on data obtained, without any data interaction. The following shows a container and its components.

Containers should not have props and children, so a container and its parent component are isolated. Therefore, no re-rendering is needed due to external factors.

To move the position of a component, you only have to put the component in the right position. You can move it to any place, as well as use in different applications and tests. You should consider the source of internal data to write different containers in different environments.

Getting Started on Predictive Analytics