19,888 0
In this article, we discuss the cause and troubleshooting procedure for the issue relating to Windows Server 2008 R2 servers being unable to connect to the network.

Recently, we have been experiencing the problem with customer's Windows Server 2008 R2 servers being unable to connect to the network. After some research, we finally found the potential bug in the Windows DHCP Client service. Here is the debugging process.

The Windows Server 2008 R2 server cannot not be connected to the network. After troubleshooting, it was found that the IP of the NIC changed to an APIPA address, 169.254.x.x. You can use ipconfig/renew to solve the problem quickly.

The problem was with the Windows computers that obtained the address through the DHCP service, so the first thing that came to our mind was that the IP address was released. For the releasing of the address, the following are several situations:

1.The user runs ipconfig/release to release the address. If the DHCP Client log is enabled, we can see the following events: 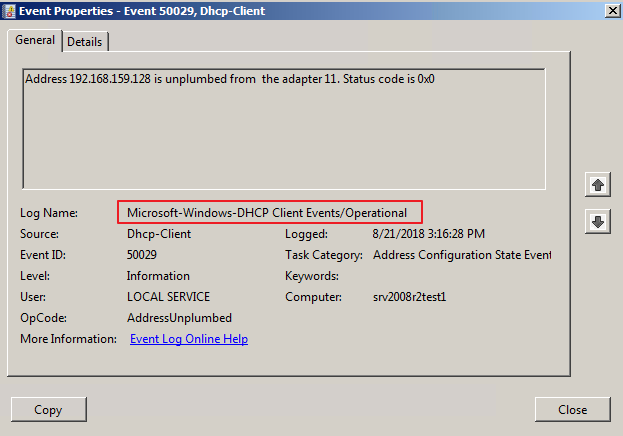 Unfortunately, the operating system does not enable the Microsoft-Windows-DHCP Client Events/Operational log by default.

2.The lease time of the DHCP IP address expires, and the system actively releases the IP address. We can see the following events from the Microsoft-Windows-DHCP Client Events/Admin: 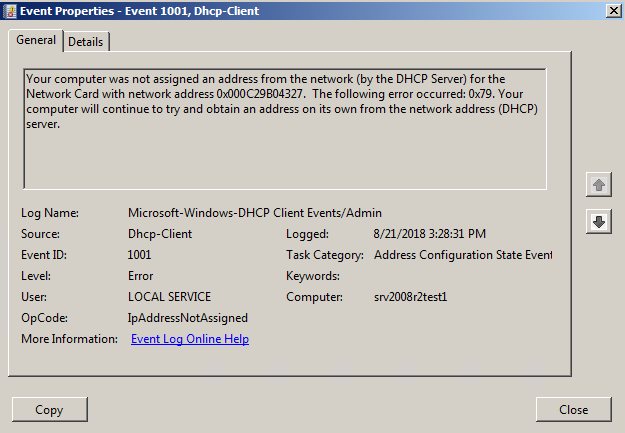 Note: In the DHCP protocol specification, we have many opportunities to renew DHCP lease info to extend the lease term.

Since these two event logs are not enabled in the system, we confirmed that the disappearance of the IP addresses of almost all our computers was caused by the one year DHCP lease expiration, by comparing the current LeaseTime of DHCP with the running time of the system in a roundabout way. Using the event log Eventlog 6013, we can easily find the system running time. As shown in the figure below, the host has run for 3152517 seconds, which is more than 364 days. 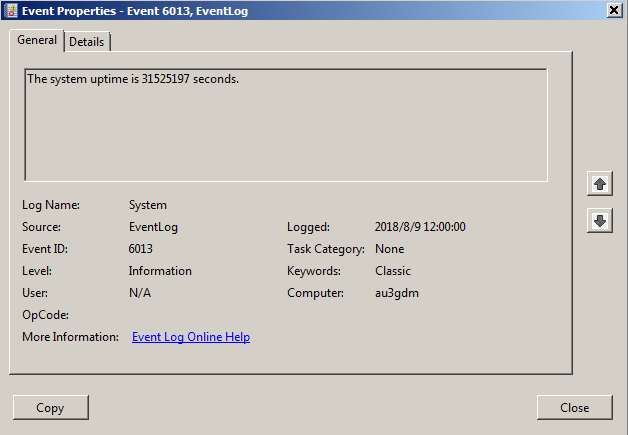 The lease period for the IP address of our DHCP service is usually one year, so we believe that it was indeed the expiration of the computer IP address lease period that caused the address to be released. At the same time, by using the DHCP Server service log, we can basically confirm that the DHCP Server did not receive the DHCP Request message from this host to renew the address during the year.

The problem is related to the operating system behavior, while the Windows operating system is a relatively closed environment, and the log is not enabled by default, so we cannot fully confirm whether the DHCP Request was sent at that time.

Then, we find the corresponding Lease information, and confirm whether the data structure is accurate:

We can clearly see that all the time computing is correct, but that a RunTime time in the structure is the same as T1 time. The RunTime records the time when the DHCP Client needs to operate on this IP Lease next time. In fact, it is similar to the time of renewing the IP, but it can tell us whether T1 has renewed the address. If the renewal is successful, the Runtime becomes the next T1, while if the renewal fails, the Runtime should be T2 or even the Expire time. But in this dump, we found that this value did not change. This shows that the DHCP Client did not perform the renewal operation for some reason at that time. At this stage, we can actually ask Microsoft to check whether this is the problem with the DHCP Client.

And, by disassembling ProcessDhcpRequestForever, we also confirm that the DHCP Client service is waiting for the event to process:

For those who are familiar with Windows programming, it is easier to understand here. In _imp_WaitForMultipleObjectsEx, the above Event information is passed into the system as a parameter. Only when the above event occurs will the system return the corresponding signal information. Then, the DHCP Client will process the response event (either in the current thread or create a new thread) according to the event, and continue to wait for the message after completion.

Therefore, we suspect that the following processing logic has an overflow problem: