Reshaping the Java Language on the Cloud

2,750 0
Learn how Alibaba is transforming the Java language.

Created some twenty years ago, Java is an object-oriented programming (OOP) language based on a large number of excellent enterprise-level frameworks. It provides stability and high performance under rigorous and long-term operating conditions. Language simplicity is important to ensure fast iteration and delivery on the cloud. This makes Java a seemingly an inappropriate language, being rather much a heavyweight. Yet, this language is still an important tool.

This article was prepared by Yu Lei, a technical expert from the Alibaba JVM team. In this article, Yu Lei describes how the JVM team deals with the challenge of serving a large number of complex services within Alibaba using Java.

Obviously, one of Java's major weaknesses is its high resource consumption, particularly its memory usage by heaps. Even when no requests are processed and no objects are allocated, processes still reserve the full heap memory space to ensure the agile allocation and operation of memory resources during garbage collection.

Alibaba's custom Java Development Kit, AJDK ZenGC and ElasticHeap have supported hundreds of applications and hundreds of thousands of instances on core links during the largest online shopping promotion in the world, the Double 11 Shopping Festival. 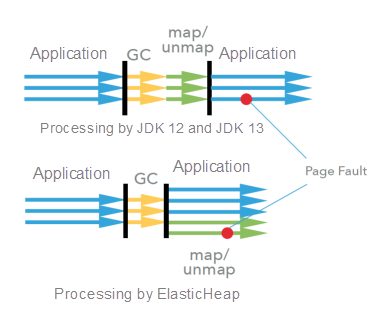 JDK 12 and later versions support triggering the concurrent mark at a fixed time and shrinking the Java heap in remark before returning it to the memory. However, this does not remove stop-the-world (STW) pauses, so the heap memory cannot be returned during young garbage collection cycles. In ElasticHeap, concurrent and asynchronous threads process the overhead that results from repeated map and unmap actions on the memory and page fault handling. In this way, the heap memory can be promptly returned or the memory is available for use again during each young garbage collection cycle. Many new applications on the cloud are developed by using the Go language to remove runtime dependencies. Statically compiled applications start up quickly, without the just-in-time compilation (JIT) ramp-up period. Then, how do we incorporate these advantages of the Go language into the Java code used by Alibaba?

The JVM team has worked closely with the SOFAStack team to develop middleware applications through static compilation. Static compilation reduces the startup duration of an application from 60 seconds to 3.8 seconds. During Double 11, statically compiled applications ran stably and without faults. The garbage collection pause was 100 milliseconds, which is acceptable for services. The memory usage and response time were the same as those of traditional Java applications. Statically compiled applications are on an equal footing with traditional Java applications in terms of stability, resource usage, and response time, but reduce the average startup duration by 2,000%.

Imagine that you develop a simple web service by using Vert.X and a quality assurance engineer asks you to perform stress testing on your web service in a 1C container with 2 GB memory capacity. You may find that your web service cannot match Go-compiled applications. This is because the coroutine model performs much better when the number of cores is small. But, is this problem caused by Java?

During the 2019 Double 11 Shopping Festival, Wisp supported hundreds of applications and hundreds of thousands of containers. Currently, 90% of Alibaba's containers have been updated to Wisp2.

When nearing peak values, the CPU usage of Wisp2-enabled servers is about 7% lower, and Wisp1-enabled servers have even lower CPU usage. This is because Wisp2 is specially designed to reduce the response times. The reduction mainly comes from the conservation of system CPU resources due to lightweight scheduling. The CPU usage is the same at midnight, the start of Double 11, where the highest peaks in traffic are seen. This indicates that Wisp2 addresses the scheduling overhead and shows little performance advantage under low CPU usage and no scheduling burden. During Double 11, CPU usage peaked in the several minutes after midnight, when the big promotion began. Data analysis indicates that the main reason was that JIT compilation was triggered at midnight. The following is an example of the program logic: If (is1111(LocalDate.now())) {branch1} else {branch2 }. What this formula means is that, if branch2 is executed during the ramp-up period, JIT compilation is not performed on branch1. When branch1 is entered at midnight, deoptimization must be triggered to recompile the method. Now, let's look at how AJDK solves the problem of deoptimization through profiling.

Principles and Adverse Impact of Deoptimization

When the JDK runs the code, it dynamically compiles the Java method through tiered compilation. For performance reasons, some optimistic assumptions are made based on data collected during high-level compilation, with optimal peak performance. Deoptimization occurs when these assumptions are not met. For example, if a code snippet in a hotspot method is only executed during the Double 11 Shopping Festival, this code snippet is not compiled during the ramp-up period. Deoptimization is triggered for the method when the code snippet is executed during Double 11.

Deoptimization has an adverse impact on two methods. The first is the executed method, which changes from efficient compilation to interpretation, lowering the running speed by a factor of over 100. The second is the method for which deoptimization is triggered during traffic peaks. This method is rapidly recompiled, and the compilation thread consumes CPU resources. The adverse impact of deoptimization is all the more obvious in scenarios where the traffic volume increases rapidly in a short period of time compared with the traffic during the ramp-up period. The Double 11 Shopping Festival is precisely such a scenario.

Feedback directed optimization was applied during the 2019 Double 11 Shopping Festival to solve the following two problems:

To address the first problem, we collected CPU usage data and counted the occurrences of deoptimization and C2 compilation at one minute after midnight during the Double 11 Shopping Festival when a traffic peak occurred.

To address the second problem, we verified the CPU usage during the first minute of the stress test.

ZProfiler is used to troubleshoot problems with Java applications in Alibaba. As the optimized and platform-based version of ZProfiler, Grace transforms the standalone architecture into a master/worker architecture and introduces a task queuing mechanism to reduce the workloads of worker threads with heavy loads. Grace is more maintainable and scalable and delivers a better user experience than ZProfiler. This lays a solid foundation for migrating tools and platforms to the cloud and developing open-source projects.

Grace is integrated with the Heap Dump function and optimizes the functions of ZProfiler. It provides an advanced version of the parsing engine to fully support OQL syntax.

JDK 8 is a widely used classic version. Migration from JDK 6 and JDK 7 is complex but provides many benefits.

OpenJDK 11 is the next stable version of OpenJDK 8. The JVM team will pay close attention to the updates of OpenJDK 11. Currently, AJDK 11 supports the Wisp2 and multi-tenant features of AJDK 8. The clusters that were migrated to JDK 11 performed stably during the 2019 Double 11 Shopping Festival.

ZGC is an important feature of JDK 11. Z Garbage Collector can keep the pause time within 10 ms in a heap ranging from dozens of gigabytes to several terabytes in size. With a short pause time, Z Garbage Collector is favored by Java developers because it removes the latency caused by long pause times typical in other garbage collectors.

Currently, Z Garbage Collector is still an experimental feature of OpenJDK. JDK 11 is not widely used in the industry and only supports Linux-based ZGCs. Z Garbage Collectors based on MacOS and Windows can be supported by JDK 14 that will be released in March 2020. Java developers will have to wait a bit longer.

The two teams have stably run online database applications on Z Garbage Collector since September 2019. These applications withstood the traffic burden during the Double 11 Shopping Festival. Online feedback has been very positive.

Alibaba's custom JDK, AJDK has evolved from a traditional managed runtime. AJDK will continue to improve the development experience for cloud applications and provide more possibilities for upper-layer applications through underlying innovation.

We are currently preparing to release Alibaba Dragonwell 11. Dragonwell 11 is a release version of Dragonwell based on OpenJDK 11. It provides a range of features such as cloud-based enablement, clear modularization, and long-term support. We recommend that you pay attention to this upcoming release and upgrade to Dragonwell 11 when it becomes available.

Quickly Learn How You Can Improve Your Java Coding