22,402 1
During the Double 11 Shopping Festival this year, all Alibaba Group services supported IPv6 to allow for a faster and more secure experience.

The most recent Alibaba Double 11 Shopping Festival witnessed a growing enthusiasm for the annual event, with more customers sharing electronic "red envelopes" and making group purchases. However, these customers may not even realize that they were connected to the Internet using IPv6 addresses. During the Double 11 Shopping Festival this year, all Alibaba Group services began to support IPv6. This is the first and most impactful, large-scale application of IPv6 in the Internet industry in China. The migration to IPv6 encompasses online shopping, live streaming, location services, and other scenarios featuring high concurrency and traffic burst.

Internet Protocol Version 6 (IPv6) is the next generation of the Internet protocol designed to replace the Internet Protocol Version 4 (IPv4). IPv6 fixes a number of problems in IPv4, including insufficient IPv4 address space. IPv6 uses an address space large enough to last for the foreseeable future. In addition, IPv6 allows for faster forwarding and enhances the security of data communication. However, the adoption of IPv6 is not an easy task. The implementation of IPv6 must be performed step by step, following the upgrading of the entire ecosystem. The upgrading covers multiple terminal devices such as personal computers and mobile phones. Apart from that, Alibaba Cloud completed transparent upgrading to the network of service providers, offline data centers of enterprises, and data centers of cloud service providers. Last but not least, multiple applications were upgraded to allow for smooth data communication using IPv6. The full migration to IPv6 during the Double 11 Shopping Festival is the first of its kind.

At the Tmall Double 11 Festival Night, high definition (HD) videos were broadcast over an IPv6 network. Youku provided 4K live streaming over an IPv6 network for the first time. The 4K Ultra HD and high frame rate (HFR) videos were streamed to audiences after real time processing and transcoding. The number of online viewers this year is 1.5 times that of the previous year, while the video stall rate dropped by 25% compared with the same period a year ago. To ensure the stability of core businesses, the technical team of Youku adopted the P2P technology in large live streaming for the first time.

During the peak period, the number of visits made by IPv6 users was four to five times the usual visits. Youku provided IPv6-based services for video on demand (VOD) and live streaming, and supported P2P-based video delivery to smoothly broadcast the Tmall Double 11 Festival Night. The first Double 11 Shopping Festival in 2009 created a gross merchandise volume (GMV) of less than 52 million RMB. This year, the GMV reached 213.5 billion RMB, with the number of transactions per second running as high as 491 thousand. The network performance was severely tested. The Alibaba Cloud virtual private cloud (VPC) handled all the cloud traffic of the Alibaba Group. For capacity planning, Alibaba Cloud deployed the largest hybrid cloud system this year and built SLB clusters with large bandwidth . Each VPC can support over 300 thousand containers, and each server can support up to 16 million sessions. The VPC handled the traffic burst at the midnight peak period with ease. The peak value of the public network traffic on an SLB instance was doubled compared with last year, and the number of connections was seven times that of last year. No online problems occurred during the entire Double 11 Shopping Festival.

During the Double 11 Shopping Festival, Taobao and Tmall covered IPv6 users in multiple provinces within China. Users could switch to IPv6 through the Taobao app, and the high-performance SLB ensured a smooth network connection without network congestion. If you found that you could snatch red envelopes quickly, it may be credited to the new network. 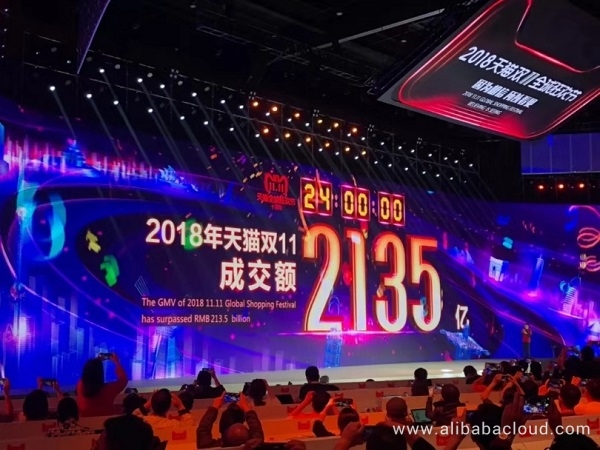 The successful application of IPv6 to the Double 11 Shopping Festival is based on the impressive accumulation of IPv6 technologies created by Alibaba Cloud. Alibaba Group is a super large-scale enterprise providing multiple services including e-commerce, logistics, payment services, life services, video services, and B2B services. For a super large-scale enterprise like Alibaba Group, the migration to IPv6 is not only limited to the network layer. The migration to IPv6 required the redesign and rebuild of the basic architecture and business structures. These architectures include IPv6 protocol stacks, equipment upgrading, IPv6 address database management, security control, traffic scheduling, and quality monitoring. The migration to IPv6 covered over one thousand internal applications. On the application layer, the migration to IPv6 covers businesses with tens of millions of daily active users (DAUs), which was a severe challenge. These businesses include Taobao, Tmall, Alipay, Youku, and AutoNavi. Alibaba Group is the one of first Internet companies in China to migrate to IPv6. Alibaba Group selected the device types suitable for IPv6 migration, redesigned the network architecture, and developed a large number of technologies to guarantee the security and reliability of IPv6 commercialization.

Unveiling the Networks behind the 2018 Double 11 Global Shopping Festival

These 3 use-cases pave a new way that depending on NAT IPv4 model....is a limitation.