25,827 0
Interspeech 2017 was held during August 20-24, 2017 in Stockholm, Sweden. Participants from various research institutes, universities and companies us. 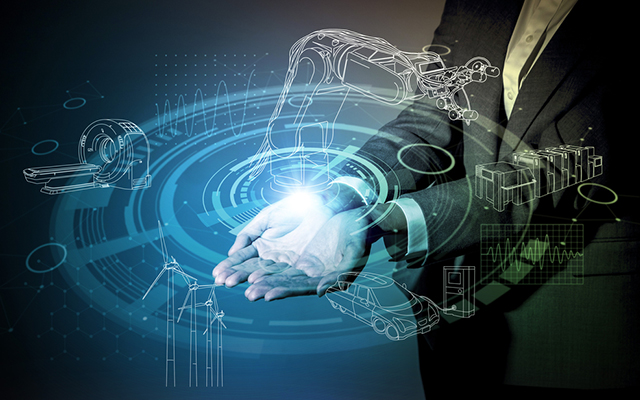 Interspeech 2017 was held during August 20-24, 2017 in Stockholm, Sweden. Participants from various research institutes, universities and renowned companies used this platform to share their newest technologies, systems, and products. A high-profile team from Alibaba Group, a Diamond Sponsor of the conference, also joined the event. It was announced that from October 25 on, Alibaba iDST Voice Team and Alibaba Cloud Community will work together on a series of information sharing meetings regarding voice technology, in an effort to share the technological progress reported in Interspeech 2017. This article covers the session on Self-adaptive Speech Recognition Technology. 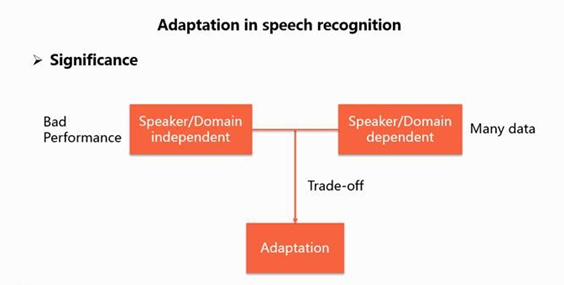 The variability may decrease the performance of speaker/domain-independent recognition systems. If a related recognition system is trained for such speaker or domain, huge dataset is required, which is costly. Self-adaptive speech recognition technology offers a good trade-off, requires less data and offers good performance.

This article titled "Dynamic Layer Normalization for Adaptive Neural Acoustic Modeling in Speech Recognition" was presented by the University of Montréal. The main idea of this article is to convert the context-independent scaling and shifting parameters in layer normalization into context-dependent parameters and dynamically generate scaling and shifting parameters from the contextual information. This is called self-adaption in model space. The main innovative aspect lies in the fact that it does not require a self-adaptive stage (i.e., the self-adaption using the target domain enables learning knowledge on the target domain) or a relevant feature that includes speaker information, such as i-Vector. 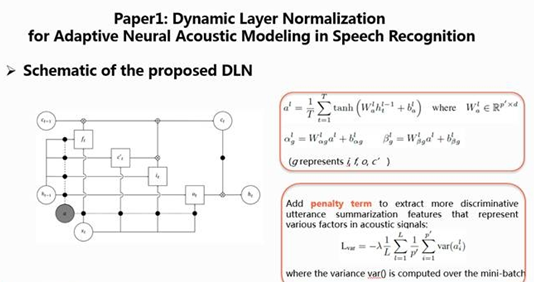 The formula for the proposed DLN is shown in the diagram on the upper right. First, use the hidden layer or input vector hl−1thtl−1 of the same size as the minibatch (TT) of the previous layer for summarization and get alal. After that, use the matrix of a linear transformation and bias to dynamically control scaling (alphalgalphagl) and shifting (betalgbetagl) parameters.

Meanwhile, on the basis of the previous CE training, add a penalty term (LvarLvar in the diagram above) to increase the variance in the sentence and extract a more discriminative summarization. 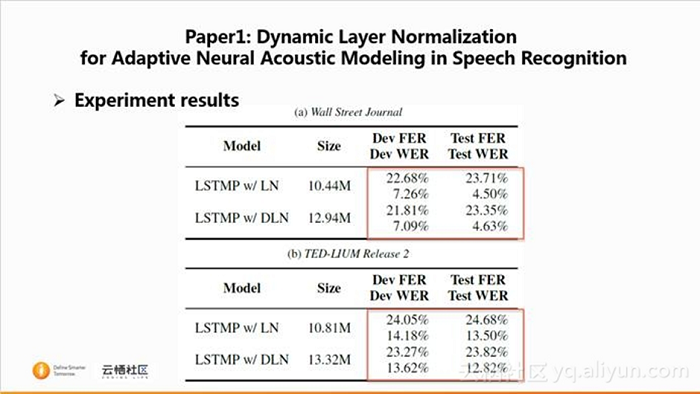 This paper further summarizes the experiments on 81-hour WSJ and 212-hour TED datasets including 283 and 5,076 speakers, respectively.

At first, the performances of LN and DLN are compared for the WSJ dataset, mainly including FER (frame error rate) and WER (word error rate) of the development and test sets. The result shows that the performance of DLN is better than that of LN, except for the WER of the test set. This paper argues that the number of speakers in the WSJ dataset is less and therefore the variability among sentences is unobvious, and that the WSJ dataset is recorded in quiet environment and therefore the sentences are smooth and steady and the DLN cannot take effect.

This paper titled "Large-Scale Domain Adaptation via Teacher-Student Learning" is from Microsoft. The main idea of this paper is to employ teacher/student structure in domain adaptation. This method does not require labeled data of target the domain, but requires parallel data of the training set. The innovative and valuable aspect of this method is the fact that it uses very large amount of unlabeled data and the output of teacher network to further improve the performance of student model.

In the above diagram, "Teacher/student" is abbreviated as T/S. The flow chart of T/S training is illustrated on the upper right. In Figure 1, the teacher network is on the left and the student network is on the right, and the posterior probabilities of their output are set as PTPT and PSPS respectively.

The training process of student network is as follows: 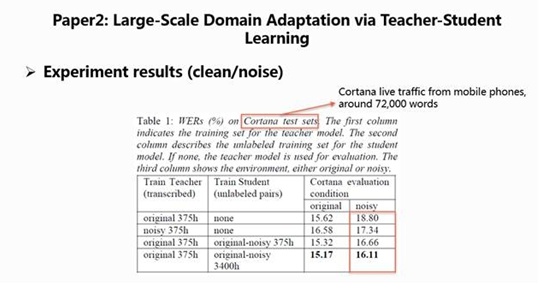 The experiment in this paper is based on the 375-hour Cortana data in English language. Different test sets are used for different domains.

For original/noisy environment, the experiment is conducted on the Cortana test set. At first, the teacher network is tested, and the test result shows that the performance of noisy speech is much worse than that of noise-free speech (18.8% vs. 15.62%). If a simulation approach is employed to train the teacher network, the test result shows improvement in the performance of noisy speech (17.34%), which is equivalent to the training on the student network using hard label. The T/S algorithm is used for Line 4 and Line 5; for the same quantity of data, the soft label is better than hard label (16.66% vs. 17.34%). Increase in the data of student network training to 3,400 hours would further enhance the performance (16.11%). 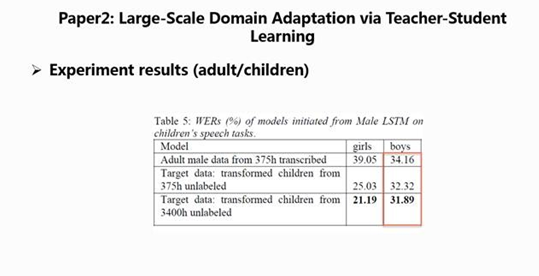 For adult/child experiment, first wipe off the 375-hour female and child data to generate an adult male model. The experiment result shows that the recognition performance of children is much worse, at 39.05 and 34.16, respectively. The usage of T/S algorithm in an original/noisy environment can further enhance the performance, and the expansion of data is beneficial to the performance.

This paper is provided by the Hong Kong University of Science and Technology and Google. The main idea and innovative aspect behind this article is application of self-adaptive approach of the Factorized Hidden Layer (FHL) to LSTM-RNN. 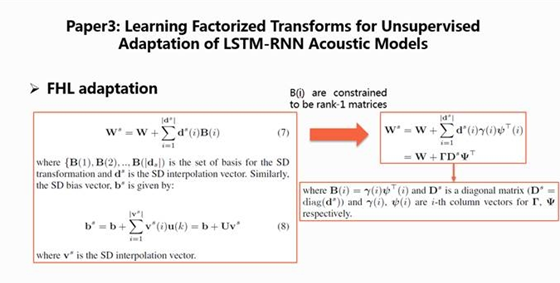 However, as the basis matrix brings in a large amount of parameters during the actual experiment, the basis matrix is constrained to be rank-1 and formula (7) is subject to alternation as shown on the upper right. As the basis matrix is rank-1, it can be expressed as a column vector (gamma(i)gamma(i)) multiplied by a row vector (psi(i)Tpsi(i)T). Meanwhile, the interpolation vector is expressed in the form of diagonal matrix (DsDs). The model training becomes easier with continued multiplication of GammaGamma, DsDs and PsiTPsiT. 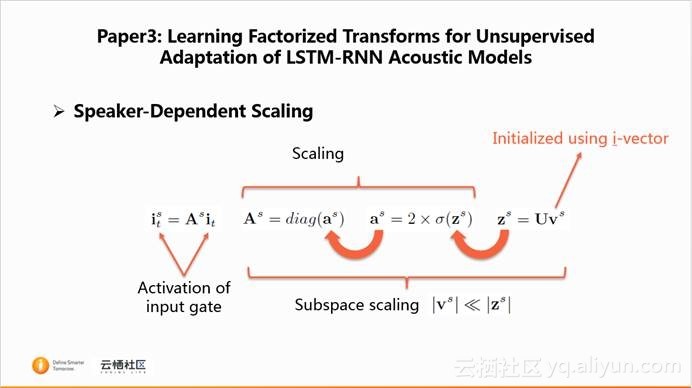 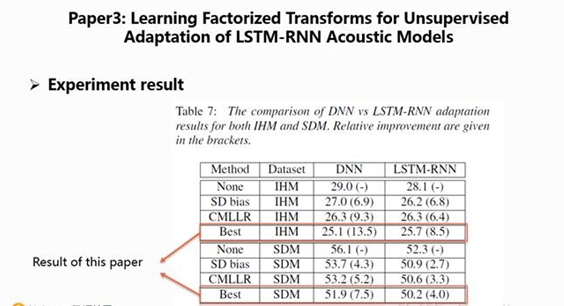 This paper is based on a 78-hour dataset. The diagram above shows the final WER generated using the algorithm in the article. In the diagram, "none" stands for no usage of self-adaptive algorithm, and "SD bias" for no usage of SD weighted matrix in the FHL other than SD bias. CMLLR is a self-adaptive algorithm. The algorithm in the article has achieved the best performance compared with SD bias and CMLLR. The improvement in performance of LSTM-RNN is less than that of DNN, indicating that the adaption on the LSTM-RNN is more difficult.