22,922 0
Developers who have been involved in hybrid development are familiar with frameworks such as Ionic and PhoneGap. Developers who have been involved in hybrid development are familiar with frameworks such as Ionic and PhoneGap. These frameworks cover a web-based app in a Native layer and then call the local library through the JSBridge technology.

Before diving into the details of JSBridge technology, let us briefly explore the traditional implementation process.

Calling JS in Native is relatively simple: you just need to observe the rule of "javascript: method name ('parameter, needed to be converted to string')".

Call method for Android 4.4 and newer:

The call of Native in JS requires the @JavascriptInterface annotation to the WebView. There is a loophole, which will be explained later. To make JS native, you need to set the following attributes for WebView:

Here we see getJSBridge(). In Native, addJavascriptInterface is used to add an exposed JS bridge object, and then the corresponding API method is declared inside the object.

Calling the Native method in HTML.

The method to call JS in Native is relatively simple. Native calls the function that HTML binds to the window through stringByEvaluatingJavaScriptFromString. Note the OC and Swift writing styles.

In Native, the API can be bound to JSContext through the introduction of the official JavaScriptCore library (iOS7 and above) (and then JS can be called in HTML through window.top. ***). 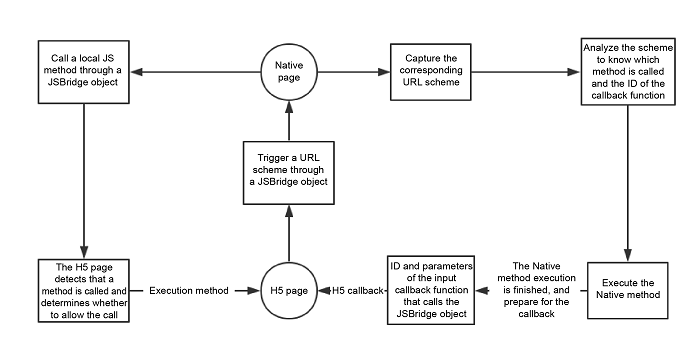 The process of JSBridge implementation can be summarized as follows. An H5 page triggers a URL in some way and Native captures the URL for analysis. Native then performs the processing and calls the H5 JSBridge object for transfer and callback.

Since the native WebView/UIWebView controls have already achieved data communication with JS, why do we still need JSBridge?

The following list describes the motivations for using JSBridge:

URL scheme is a link, like the URL, designed to facilitate direct mutual calls between apps. You can open the system application for a system URL scheme. Otherwise, you can try to find whether an app has registered such a scheme and open that corresponding app.
Note: A scheme will be valid only after native app registration is completed.

However, in an actual development scenario, the app does not register the corresponding scheme. Instead, the front-end page triggers the scheme (such as iframe.src) in some way. Native captures the corresponding URL to trigger the event and gets the current triggering URL, and then Native checks if the method is triggered according to the defined protocol.

To implement JSBridge, we need to analyze the following steps:

The figure below shows the complete process of JSBridge:

Designing Global Bridge Objects for Interaction Between Native and JS

We stipulate that the communication between JS and Native must be implemented through an H5 global object – JSBridge. The object has the following characteristics:

The object name is "JSBridge", which is an attribute of the global object window in the H5 page. It is elaborated as:

This object has the following methods: After we define the global bridge object, we can use its callHandler method to call the Native API.

The callHandler execution includes the following internal steps:
1.Determine whether a callback function exists. If yes, a callback function ID is generated, and the ID and the corresponding callback is added to the callback function set responseCallbacks.
2.The input data and method name are spliced into a URL scheme through a specific parameter conversion method.

3.A internal hidden which has long been ready iframe is used for triggering the scheme

Note: Normally it is possible to initiate a network request through window.location.href. However, there is a very serious problem when we change the value of window.location.href several times in succession: the Native layer can only receive the last request, while ignoring all the previous ones. To avoid this problem, we need iframe to initiate network requests at the JS end.

Native Notifying the API to be Called

In our previous step, we successfully triggered the scheme on the H5 page.
Our next step is to explore how Native captures the scheme triggering event.
Android and iOS have their respective handling approaches.

In Android (in WebViewClient), the shouldoverrideurlloading helps to capture the URL scheme triggering event.

iOS, UIWebView has a unique feature: all the network requests initiated in the UIWebView can be notified to the Native layer through the delegate function. In this way, we can capture the URL scheme triggering event in WebView (the principle is to use shouldStartLoadWithRequest).

In previous steps, Native has received a JS call method. In the next step, Native should parse the data according to the defined data formats. Native can extract the callback parameter ID, API name, and parameters following this format after receiving the URL, and then follow the steps below.

In this step, Native calls H5 JS methods through JSBridge or notify H5 for callback. The messageJSON data format in it has two different types.

Registration and Format of the API Method in H5

Previously we mentioned that Native takes the initiative to call the API methods registered in H5.
Let us now study, how we can register API methods in H5 for the Native to call.

As indicated in the code above, the first data is the data passed by the Native. The second callback is encapsulated once internally. After the callback is executed, it triggers the URL scheme and notifies the Native to get the callback information.

The diagram below shows a JSBridge object. The following diagram illustrates the full process of JSBridge implementation.

JSBridge in iOS and Android

In an actual development, how can we develop a unified scheme for different situations in both Android and iOS? The JSBridge mentioned above is based on the URL scheme. However, if you do not plan to support versions lower than Android 4.2 and iOS 7, you must consider another scheme.

In iOS, Native registers a unified API through methods in JavaScriptCore, and the other steps are the same with those in Android.

Javascript Bridge is a unified messaging system that enables easy building of cross-language services that allow you to share data and real-time updates among your servers and clients. This article explores in detail the profiling of JSBridge and its implementation process in both iOS and Android respectively.