1,391 0
This article demonstrates the implementation of remote configuration management in Dubbo-go.

By Zou Yixian (GitHub ID: @zouyx), an open-source enthusiast. He works in the SheIn supply chain department and is responsible for the supply chain open platform.

If the configuration files are placed locally, you have to restart the system after each update, making it difficult to manage configuration files and preventing real-time updates from taking effect right away. Local files also rely on manual versioning, which greatly increases the costs and difficulty of O&M in microservice scenarios.

Based on the preceding background, let's summarize the following purposes:

In Dubbo-go, the configuration center is responsible for the following scenarios:

For now, Dubbo-go primarily supports all open-source configuration centers supported by Dubbo, including:

Then, how do we implement this in Dubbo-go? The answer is to use the dynamic plug-in mechanism, which loads different implementations of configuration center on-demand at startup.

These functions are implemented in an independent sub-project. Check out this page for more information.

In this logic, some of you may be confused about why we need to read the local configuration file now if we have agreed to use the configuration center. The reason is that the information that Dubbo-go reads is divided into two parts:

During the renovation, the following issues need to be considered:

1) How can we support multiple configuration centers? How can we load data on demand?

By abstracting the DynamicConfiguration class, developers can quickly support multiple configuration centers. After you import a specified component package, Dubbo-go loads the required components into the memory during startup so that they can be called on demand by applications, as shown by the cells in the green background in the following figure. Dubbo-go parses it internally to the following format:

Then, Dubbo-go uses it internally to initialize the configuration center link.

This interface specifies the functions to be implemented in each configuration center, as described below. This phase prioritizes the compatibility with the existing Dubbo design to reduce learning costs for users. Dubbo-admin implements application-level configuration management as the service provider, whereas Dubbo-go implements configuration delivery management as the consumer. The following section uses ZooKeeper as an example to analyze the overall processes of service providers and consumers. The preceding figure shows the storage structures of the Dubbo.properties files respectively in ZooKeeper and Apollo:

The biggest difference between ZooKeeper and Apollo is the node where Dubbo.properties are located.

The following uses Apollo as an example to describe how to support a new configuration center.

Choose a Client and SDK for the Configuration Center

This example uses the Apollo Go Client obtained from https://github.com/zouyx/agollo

Note: If you cannot find the client, you can implement it yourself.

Create a new client creation method. We recommend creating a single client at a time. 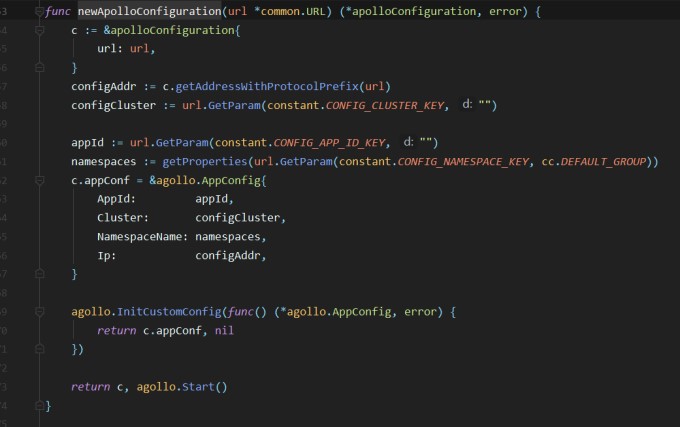 Choose the implementation method. If this method is not implemented, the configuration in Dubbo-go cannot be dynamically updated.

Use the default implementations of Parser and SetParser, which are Properties converters by default.

From the preceding design, let's depict its application. This document will not elaborate on the more specific implementation process. If you are interested, we recommend that you check the source code. Your continued interest in and contributions to the code are welcome.

Though the configuration center is compact, its functions are complete. Although the preceding methodology is imperfect, it is developing on the right track from the overall architecture perspective. In terms of scalability, its performance is good. Currently, it supports a limited number of configuration centers, which are actually ZooKeeper and Apollo, and only supports configuration files with the properties extension. While this already meets the requirements of basic application scenarios, it still has some way to go until it is optimized.

1) Nacos (pending release)
2) etcd (under development)
3) Consul (not supported at present)
4) Additional configuration file formats, such as YML and XML

Common Solutions for Scheduling and Delay Problems in Business Scenarios