The word “Hidden” symbolizes the fact that only the symbols released by the system are observable, while the user cannot view the underlying random walk between states. Many in this field recognize HMM as a finite state machine.

HMM has a strong statistical foundation with efficient learning algorithms where learning can take place directly from raw sequence data. It allows consistent treatment of insertion and deletion penalties in the form of locally learnable methods and can handle inputs of variable length. They are the most flexible generalization of sequence profiles. It can also perform a wide variety of operations including multiple alignment, data mining and classification, structural analysis, and pattern discovery. It is also easy to combine into libraries.

MEMM takes into account the dependencies between neighboring states and the entire observed sequence, hence a better expression ability. MEMM does not consider P(X), which reduces the modeling workload and learns the consistency between the target function and the estimated function. 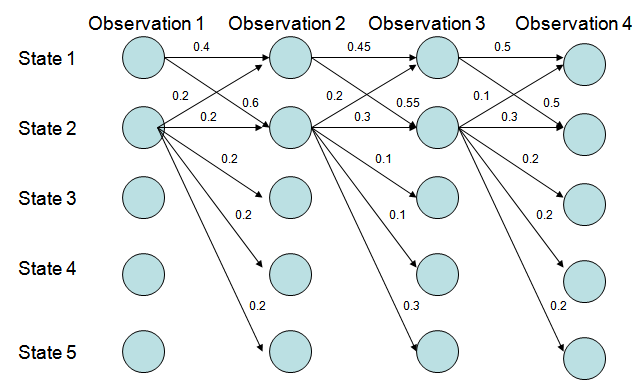 In Figure 3, State 1 tends to convert to State 2, and State 2 tends to stay at State 2 at the same time.

The CRF model has addressed the labeling bias issue and eliminated two unreasonable hypotheses in HMM. Of course, the model has also become more complicated.

On the other hand, MEMMs cannot find the corresponding parameters to meet the following distribution:

Suppose o is the observed value, and m is the model.

If you model P(o|m), it is a generative model. The basic idea is, first, to establish the probability density model of the sample, and then use the model for inference prediction. The requirement of the samples being infinite or as large as possible is common knowledge. The method draws from statistical mechanics and Bayes theory.

HMM directly models the transition probability and phenotype probability, and calculates the probability of co-occurrence. Thus, it is a generative model.

If you model on the conditional probability P(m|o), it is the discriminative model. The basic idea is to establish the discriminant function with finite samples, and directly study the prediction model without considering the generative model of samples. Its representative theory is the statistical learning theory.

CRF is a discriminant model. MEMM is not a generative model, but a model with finite states based on state classification.

MEMM establishes the probability of co-occurrence based on the transition probability and the phenotype probability. It calculates the conditional probability, and only adopts the local variance normalization, making it easy to fall into a local optimum.

CRF calculates the normalization probability in the global scope, rather than in the local scope as is the case with MEMM. It is an optimal global solution and resolves the labeling bias issue in MEMM.

Advantages and Disadvantages of CRF

CRF is highly computationally complex at the training stage of the algorithm. It makes it very difficult to re-train the model when newer data becomes available.

This post detailed out a comparative analysis between Hidden Markov Model (HMM), Maximum Entropy Markov Models (MEMM), and Conditional Random Fields (CRF). In this post we categorically learnt that CRFs and MEMMS are mainly discriminative sequence models whereas HMMs are primarily generative sequence models. It is Bayes Rule that forms the basis of HMM. On the contrary, CRF and MEMM’s based on MaxEnt models over transition and observable features.