Container storage is a basic Kubernetes component that provides data persistence and is an important guarantee for stateful services. By default, Kubernetes provides the mainstream volume access solution In-Tree and the plug-in mechanism Out-Of-Tree, which allows other storage services to access Kubernetes services. This article describes the Kubernetes storage architecture and the principles and implementation of volume plug-ins.

Example: Mount a Volume in Kubernetes

The following example shows how to mount a volume.

As shown in the following figure, the YAML template on the left defines a StatefulSet application. In the template, the volume named disk-pvc is defined and mounted to the /data directory in the pod. disk-pvc is a persistent volume claim (PVC) volume where a storageClassName is defined.

Therefore, this template is a typical dynamic storage template. The right part of the preceding figure shows the process of mounting the volume in six steps. You can add some tags to the volume. In this way, the pod using this PV will be scheduled by the scheduler to the expected node based on the tags.

This section describes the storage architecture of Kubernetes. Next, we will describe the functions of each component.

defines the parameters of the pre-attached storage space in detail.

For example, when we attach a remote Network Attached Storage (NAS) file system, the parameters of the NAS must be defined in a PV. A PV is not restricted by a namespace and is generally created and maintained by the administrator.

is a storage interface called by users in a namespace. It does not perceive storage details and defines the Size and AccessMode parameters for some basic storage.

The following figure shows the status changes of a PV. The following figure shows the status changes of a PVC, which are simpler. The following figure shows how to select a PV to be bound to a PVC.

The storage class that is specified by the StorageClassName tag creates a PV when no PV is available for the PVC. When a PV meeting the conditions is available, it directly binds the PV to the PVC.

AccessMode is usually defined for the tags such as ReadWriteOnce and RearWriteMany in the PVC. The PVC and PV to be bound must have the same AccessMode.

The size of a PVC cannot exceed that of a PV because the PVC is a declared volume and can be bound only when the actual volume is at least equal to the declared volume.

Next, let's take a look at the PV controller implementation.

The PV controller can be implemented by the ClaimWorker and VolumeWorker logic. The system tag pv.kubernetes.io/bind-completed is used to identify the status of a PVC. That is the simple implementation logic for the PV controller.

The name AD controller is short for the attach and detach controller.

The following table provides an example of desiredStateOfWorld and actualStateOfWorld objects. The AD controller contains many informers, which synchronize the pod statuses, PV statuses, node statuses, and PVC statuses in the cluster to the local machine. This is the simple implementation logic of the AD controller.

The volume manager is one of the managers in the kubelet. It is used to attach, detach, mount, and unmount volumes on the local node.

The following describes the attach and detach operations:

The following figure shows the implementation logic of the volume manager. The outermost layer is a loop while the inner layer is a poll based on different objects, including the desiredStateOfWorld and actualStateOfWorld objects.

The PV controller, AD controller, and volume manager mentioned above manage PVs and PVCs by calling volume plug-in APIs, such as Provision, Delete, Attach, and Detach. The implementation logic of these APIs is in volume plug-ins.

Volume plug-ins can be divided into the In-Tree and Out-of-Tree plug-ins based on the source code locations. 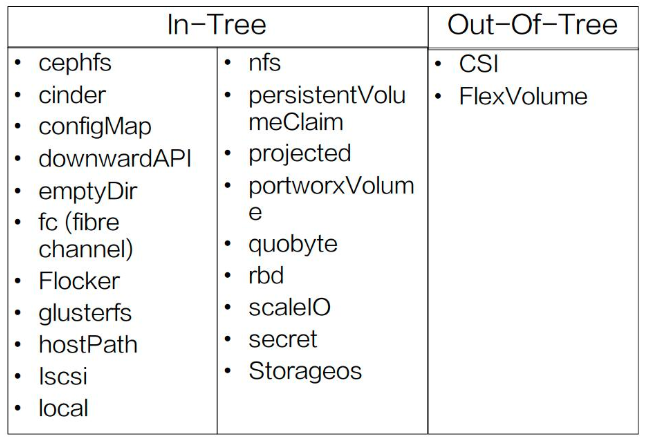 Kubernetes manages plug-ins in the PV controller, AD controller, and volume manager by using VolumePlguinMg, mainly with the plug-ins and prober data structures.

Plugins is an object used to save the plug-in list, while prober is a probe used to discover new plug-ins. For example, FlexVolume and CSI are extension plug-ins, which are dynamically created and generated and can be discovered only by a probe.

The following figure shows the entire process of plug-in management.

When the PV controller, AD controller, or volume manager starts, the InitPlugins method is executed to initialize VolumePluginMgr.

Now you understand the plug-in management mechanism of volume plug-ins.

Pods must be scheduled to a worker before running. When scheduling pods, we use different schedulers for filtering, including some volume-related schedulers, such as VolumeZonePredicate, VolumeBindingPredicate, and CSIMaxVolumLimitPredicate.

VolumeZonePredicate checks the tags in PVs, such as the failure-domain.beta.kubernetes.io/zone tag. If the tag defines the zone information, VolumeZonePredicate determines that only the nodes in the corresponding zone can be scheduled.

For more information about how to schedule volumes, see Getting Started with Kubernetes - App Storage and Persistent Volumes: Snapshot Storage and Topology Scheduling.

As shown in the following figure, volume plug-ins contain some FlexVolume implementation code. However, the code has only the proxy function.

FlexVolume is a kubelet-driven executable file. Each call is equivalent to running the Is script of shell. It is not a resident memory daemon.

Stdout of FlexVolume is a call result of the kubelet in JSON format. The following figure shows a command format and call example. When defining a PV, we can use the secretRef field to define certain secret functions. For example, secretRef can transfer in the username and password required for mounting.

Let's take a look into the mounting and unmounting processes of FlexVolume. First, the Attach operation calls a remote API to attach the storage to a device on the target node. Then, the MountDevice operation mounts the local device to the GlobalPath and performs certain operations, such as formatting. The Mount operation (SetUp) mounts the GlobalPath to the PodPath, which is a directory mapped upon pod startup.

For example, assume the volume ID of a disk is d-8vb4fflsonz21h31cmss. After the Attach and WaitForAttach operations are completed, it is mounted to the /dec/vdc directory on the target node. After the MountDevice operation is performed, the device is formatted and mounted to a local GlobalPath. After the Mount operation is performed, the GlobalPath is mapped to a pod-related subdirectory. Finally, the Bind operation maps the local directory to the pod. This completes the mounting process. The init(), doMount(), and doUnmount() methods are implemented. When the script is executed, the input parameters determine the command to be run.

The following figure shows a PV template of the FlexVolume type. It is similar to other templates, except that the type is defined as flexVolume. In flexVolume, driver, fsType, and options are defined.

Similar to other types, we can define filtering conditions by using matchLabels in selector. We can also define some scheduling information, such as defining zone as cn-shenzhen-a.

Similar to FlexVolume, CSI is an abstract interface that provides volumes for third-party storage.

Why is CSI required since we can use FlexVolume?

In addition, CSI adopts container-based deployment, which is less environment-dependent but more secure and provides rich plug-in functions. FlexVolume is a binary file in the host space. Running FlexVolume is equivalent to running a local shell command, which allows us to install some dependencies when installing FlexVolume. These dependencies may affect customer applications. Therefore, this hurts security and environment dependencies.

CSI is implemented in the form of CRD. Therefore, it introduces the following object types: VolumeAttachment, CSINode, CSIDriver, and implementation of the CSI controller server and CSI node server.

The AD controller and volume plug-in in the CSI controller server are similar to those in Kubernetes, and they create the VolumeAttachment object.

In addition, the CSI controller server contains multiple external plug-ins, each implementing a certain function when combined with a CSI plug-in. For example:

This is the overall topology of CSI. The following sections describe different objects and components.

In status, attached specifies the attachment status. If the value is false, external-attacher performs an attach operation. CSIDriver describes the list of CSI plug-ins deployed in the cluster. These plug-ins must be created by the administrator based on the plug-in type.

For example, some CSIDrivers are created, as shown in the following figure. We can run the kuberctl get csidriver command to view the three types of CSIDrivers: disk, Apsara File Storage NAS (NAS), and Object Storage Service (OSS).

The CSIDriver name is defined, and the attachRequired and podInfoOnMount tags are defined in spec. CSINode is the node information in a cluster and is created upon node-driver-registrar startup. CSINode information is added to the CSINode list each time a new CSI plug-in is registered.

As shown in the following figure, the CSINode list is defined, and each CSINode has its specific information (YAML file on the left). Take cn-zhangjiakou.192.168.1.49 as an example. It contains the disk CSIDriver and the NAS CSIDriver. Each CSIDriver has its nodeID and topologyKeys. If no topology information is available, set topologyKeys to null. In this way, if a cluster contains 10 nodes, we can define CSINodes only for certain nodes.

This section describes the deployment of block storage.

The driver registrar only provides the registration function and is deployed on each node.

The deployment for file storage is similar to that for block storage, except that no external-attacher or VolumeAttachment is available.

The templates for CSI are similar to those of FlexVolume.

The main difference is that the template type is CSI, which defines driver, volumeHandle, volumeAttribute, and nodeAffinity.

The middle part in the following figure shows an example of dynamic scheduling, which is the same as that of other types, except that a CSI provisioner is defined. The following is a mounting example:

After being started, a pod mounts /dev/vdb to /data. It has a GlobalPath and a PodPath in the cluster. We can mount /dev/vdb to a GlobalPath, which is the unique directory of a CSI PV on the node. A PodPath is a local directory on a pod, which maps the directories on the pod to the container.

In addition to mounting and unmounting, CSI provides some other functions. For example, the username and password information required for the template can be defined by Secret. FlexVolume, mentioned earlier, also supports this function. However, CSI can define different Secret types at different stages, such as Secret at the Mount stage and Secret at the Provision stage.

Topology is a topology awareness function. Not all nodes in the cluster can meet the requirements of a defined volume. For example, we may need to mount different zones in the volume. We can use the topology-aware function in such cases. You can read the related article for reference.

Block Volume defines a volume mode, which can be a block type or a file system type. CSI supports block volumes. That is, when a volume is mounted in a pod, it is a block device rather than a directory.

Skip Attach and PodInfo On Mount are two features of the CSIDriver. This article introduces the features of volumes in Kubernetes clusters.

I hope that this article helps you with volume design, development, and troubleshooting.