20,950 0
In this article, we will discuss about the multi-tenant PaaS architecture of MaxCompute and how this architecture improves big data analytics.

In the big data session of the 2017 Computing Conference Beijing Summit, Li Xuefeng, a senior technical expert from Alibaba Cloud, talked about multi-tenant isolation on a financial big data platform. He started his speech with the problems of tenant isolation in a traditional single-tenant IaaS architecture and then talked about the multi-tenant PaaS architecture of Alibaba Cloud MaxCompute and how MaxCompute implemented secure isolation. We will discuss these architecture details in this article. As shown in this figure, the bottom layer of the single-tenant big data product architecture is HDFS2, on which resource control platforms such as Hadoop Yarn and MESOS reside. We can implement specific computing models, such as MR, Hive, HBASE, and Spark over the resource control platforms. In this ecosystem, the IaaS platform is generally available to the same tenant. When new business requirements arise, the tenant can apply for a batch of VM clusters on the IaaS platform, and then deploy open-source products on the clusters. This ecosystem encounters following problems from the perspective of isolation:

Firstly, the IaaS single-tenant big data product architecture has logic issues in actual use. Users must know the specific logic of each product for data analysis. For example, users must understand the Hive logic when using SQL and possess knowledge of Spark when using Spark. It is possible to control the cost of learning at a low level with fewer products, but this increases exponentially when we have to use multiple products collaboratively. Additionally, different open-source products usually cannot identify the logical model of each other, which worsens the logic issue in authentication scenarios.

Lastly, open-source products often offer user-defined logic, for example, UDF of MR or Hive. Running user-defined code in big data products brings security risks. For example, Hadoop Yarn simply isolates user-defined code with Linux Containers. In this isolation mechanism, the user-defined code logic runs in the same kernel as the Hadoop process. If the attacking program in the code logic affects the kernel, the big data product processes running in the same kernel are also affected. Generally, a job of a big data product runs on most of or even all machines in a cluster, depending on the size of the data shard. In this case, the entire cluster becomes vulnerable to security risks. In an extreme condition, the entire computing cluster may break down when a hacker exploits a kernel vulnerability to attack a machine successfully, and the job shard is large enough. 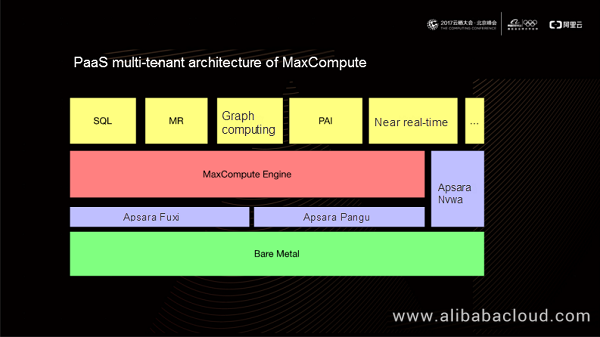 We will now discuss these three isolation mechanisms offered by MaxCompute in detail.

Currently, a MaxCompute instance provides a unified tenant system, no matter how many physical clusters the instance is running on. In this tenant system, the data resource view and privilege management model for the same tenant is unique and bound to the tenant model. In real-world applications, a tenant on MaxCompute maps to a project, which contains all resources, properties, and privileges of the tenant. 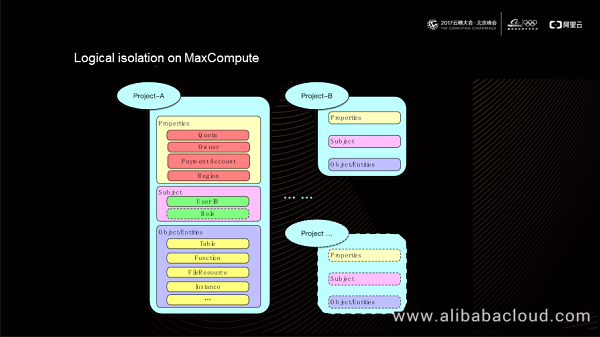 As shown in the preceding figure, a project consists of three parts: properties, subject, and object. Properties of a project include information such as quota, owner, payment account, and region. All authorized accesses in a project must use the user IDs as the subject, based on which MaxCompute offers a role model for authority aggregation. The resources we have used in the above-mentioned computing models (such as MR and Hive) are all mapped to a specific object in a project. For example, resources in the SQL model are table objects, and resources in the UDF model are function objects. Based on the preceding logical model, MaxCompute offers a set of authentication and authorization mechanisms for privilege control. A project owner has all the privileges over the project. Any user who wants to use this project for computing must get authorization from the project owner first (using the GRANT statement). When accessing the project, a user submits its user ID as the user identity to perform operations such as reading and writing tables, creating functions, or adding and deleting resources. MaxCompute uses a unified ACL logic to determine whether the current user ID has the required privilege before it allows execution of such operations.

The computing engine of MaxCompute depends on the Apsara operating system to offer resource operation and isolation capabilities. When the Fuxi engine on a machine in the cluster receives a worker plan, it sets the Cgroup parameter on this machine based on the quota of the user to which the worker belongs. In this way, jobs submitted by different users run with different Cgroup parameter settings on the physical machine. Currently, MaxCompute leverages the Cgroup capability of the Linux kernel to allocate CPU, memory, and other resources to a certain process on a physical machine. A single process running untrusted code (which may contain malicious code) may damage the computing platform. MaxCompute offers an embedding isolation solution to prevent this potential security risk. The innermost layer of this solution provides Java sandbox and Python sandbox. The language-specific sandboxes implement innermost isolation. For example, Java UDF can restrict the classes that can be loaded, and Python UDF can restrict specific functions. At the intermediate layer, MaxCompute isolates processes based on Linux kernel mechanisms, including namespace, Cgroup, and secomp-bpf. At the outermost layer, MaxCompute offers lightweight VMs (created in several hundreds of milliseconds) using in-depth custom Linux kernel and a minimized hypervisor. Finally, the untrusted code runs on a hypervisor over the physical machine. The Fuxi module treats the untrusted code as a hypervisor process, but the untrusted code is running in an isolated environment. MaxCompute also supports hardware acceleration for a user-defined code. For example, PAI supports direct GPU access. MaxCompute supports GPU pass-through into a VM in PCIe pass-through mode, which allows guest processes to access the GPU over the PCIe bus and GPU driver in the guest kernel.
GPU access from a VM over the PCIe bus has a similar speed to GPU access from a physical machine. Also, this GPU access mode removes the need to install the GPU driver on a physical machine, thereby eliminating the impact of GPU driver on platform stability and reliability. MaxCompute offers the network isolation capability for users' code logic on some products. It creates a virtual network between the VMs provisioned by the Fuxi module. These VMs can communicate directly through the virtual network, ensuring compatibility between open-source code running in the VMs. You can also see from the preceding figure that the user-defined code logic does not connect to the physical network directly, whereas the trusted code running on Fuxi, including the code in the MaxCompute framework, uses the physical network for communication. This guarantees a low communication latency in the MaxCompute framework.

End-to-End IoT Security Evaluation Methods for the Next Decade