From Confused to Proficient: Details of the Kubernetes Cluster Network

3,891 0
This article illustrates the method to implement the Alibaba Cloud Kubernetes cluster network and further analyzes it from the perspectives of network construction and network-based communication.

There are two solutions available for implementing the Kubernetes cluster network of Alibaba Cloud. One is Flannel and the other is Terway based on Calico and Elastic Network Interfaces (ENIs). Terway and Flannel are similar with an exception that Terway supports pod ENIs and the NetworkPolicy function.

In this article, Flannel is used as an example to analyze the method of implementing the Alibaba Cloud Kubernetes cluster network. This article analyzes the method from the perspectives of network construction and network-based communication and uses the 1.12.6 version for the analysis. A cluster is created based on Virtual Private Cloud (VPC) and Elastic Compute Service (ECS) instances. After creating VPC and ECS instances, obtain the resource configuration, as shown in the following figure. Obtain one VPC whose CIDR block is 192.168.0.0/16 and several ECS instances whose IP addresses are allocated from the VPC CIDR block. Based on the initial resources, obtain the cluster CIDR block in the cluster creation console. The value is transferred to the provision script on a cluster node as a parameter, and then the script transfers it to kubeadm, a cluster node configuration tool. kubeadm finally writes the parameter to the kube-controller-manager.yaml file of the static pod of the cluster controller.

One is that the cluster uses the Cloud Controller Manager (CCM) to configure routing table entries (RTEs) for VPC. Each node has one RTE. That is, if the VPC router receives the IP address in a node pod CIDR block, the route forwards the network packet to the corresponding ECS instance.

The other operation is the creation of the cni0 virtual bridge and related routes. The configurations are used to forward external network packets to the virtual local area network (VLAN) of cni0 when the received IP address is in the pod CIDR block. In the preceding three phases, the cluster constructs network communication channels between pods. In this case, if the cluster schedules a pod to a node, kubelet uses Flannel CNI to create a network namespace and veth devices for the pod, adds a veth device to the cni0 virtual bridge, and configures IP addresses for veth devices in the pod.

The pod is connected to the network communication channels. Note that flanneld in the previous section is different from Flannel CNI in this section. flanneld is a pod that is sent by DaemonSet to each node and is used to construct networks (channels). Flannel CNI is a CNI plug-in installed by the kubernetes-cni RPM package during node creation, and is called by kubelet to construct a network (branch) for a pod.

With a better understanding of the difference between flanneld and Flannel CNI, it is easy to understand the usage of their configuration files. For example, the /run/flannel/subnet.env file is created by flanneld, which is an environment variable file providing input for Flannel CNI. The /etc/cni/net.d/10-flannel.conf file is a subnet configuration file copied by the flanneld pod (actually the install-cni script in the pod) from a pod to a directory on a node for Flannel CNI. The pod network environment is constructed.

In the network environment, a pod completes the following communication: 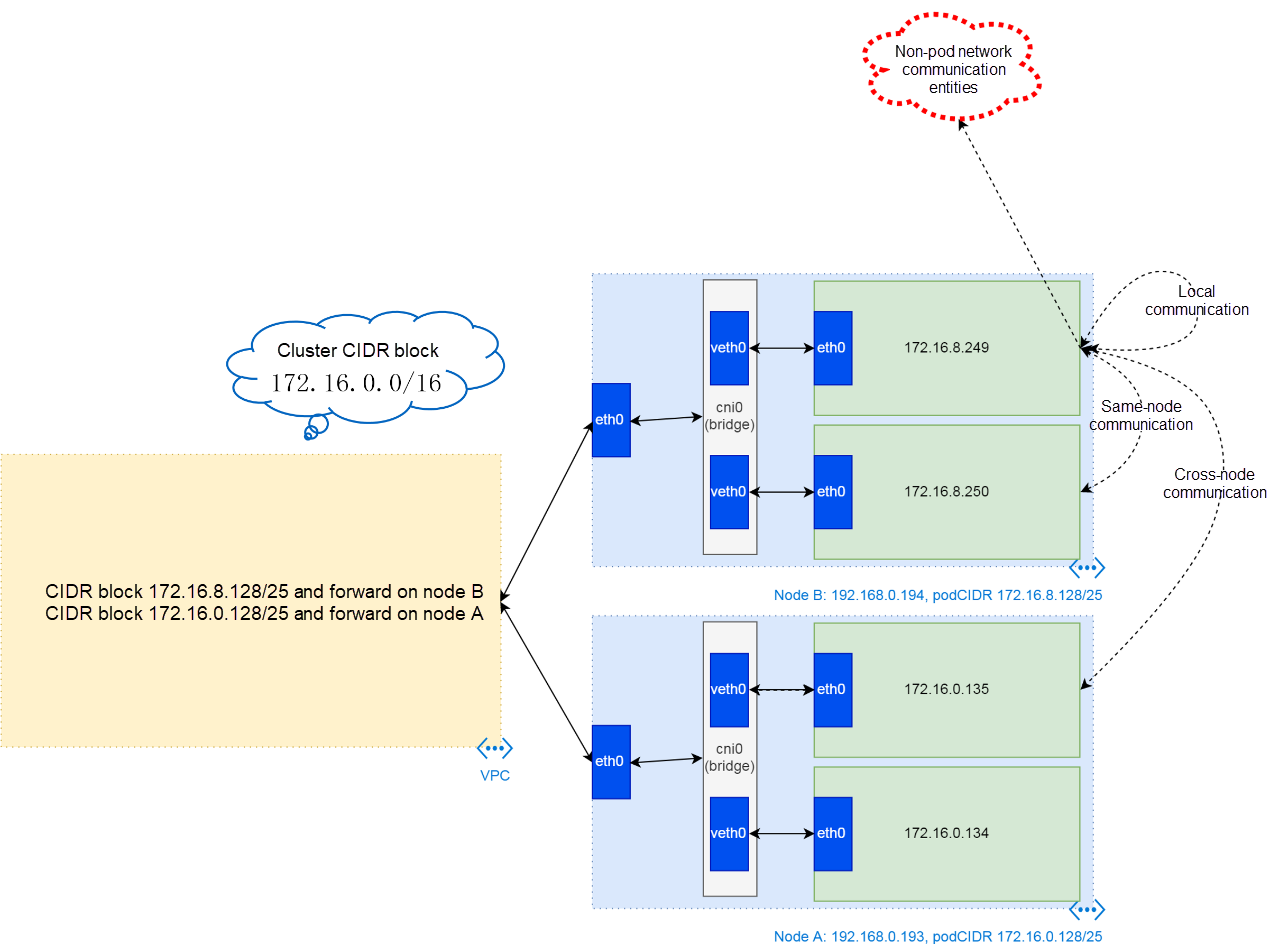 For communication between a pod and non-pod network entities, SNAT needs to be configured based on the iptables rule on a node. The rule indicates that flanneld configures SNAT according to the --ip-masq command line.

From Confused to Proficient: Analysis of Failure to Delete a Kubernetes Cluster Namespace

From Confused to Proficient: Kubernetes Authentication and Scheduling