In the previous article of this series, we discussed the steps to automate the flow of continuous deployment on the cloud. This is the third and final part of the DevOps series that focuses on the deployment strategies on a Kubernetes cluster with Alibaba Cloud Container Service.

This is the default deployment strategy on the Kubernetes cluster. Rolling updates allow Deployments' update to take place with zero downtime by incrementally updating Pods instances with new ones. The new Pods will be scheduled on Nodes with available resources.

This strategy aims to prevent application downtime by keeping at least some instances up-and-running at any point in time while performing the updates. Old pods are only shutdown after new pods of the new deployment version have started-up and became ready to handle traffic.

Canary deployment is a pattern for reducing risk involved with releasing new software versions. But in software, releasing canaries can be a strategic tactic for teams adopting continuous delivery practices. The idea is that you'll rollout a new release incrementally to a small subset of servers side by side with its Stable version. Once you test the waters, you can then rollout the changes to the rest of the infrastructure. This effectively exposes new versions to a small set of users, which acts as an early indicator for failures that might happen. Canaries are very handy for avoiding problematic deployments and angry users! If one canary deployment fails, the rest of your servers aren't affected and you can simply ditch it and fix the root cause.

To experience the canary release process in Alibaba Cloud, you would be creating a new image based on the different version of the source codes.

To create a new branch from the tag,

5.2 Checkout the Codes from the Branch

Checkout the source codes from the new branch

Go to the home directory of the project source code – java-webapp-docker. Change the directory to src/main/webapp. Open the index.jsp with an editor such as vi or vim. Change the header <h2> to "Welcome to Alibaba Cloud DevOps v2.0" and also change the font of the header to red

Add the file to the Git for commit by typing:

Then, to commit the code to the repository:

To delete the previous tag, type

To create a new tag, type

Delete and recreate the tag remotely

To create the new tag

Go back to the Container Registry->Build page to check out the latest build of the image. If the build is successful, the latest image with tag 2.0 should appear on the list. 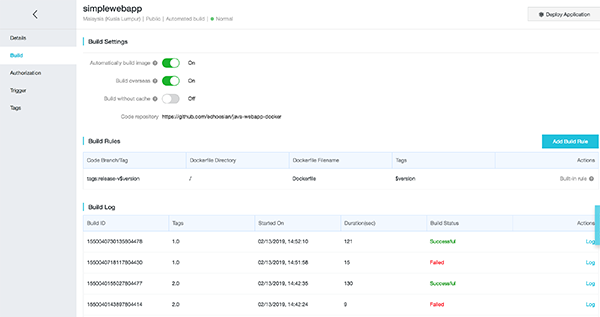 Next, we would need to create a new deployment for the image to the Kubernetes cluster.

Go to the Container Service -> Deployment page. Click on the "Create by Template" button.

Refer the YAML script, modify the image URL based on your private registry image URL.

In case if you cannot remember the URL of the image registry, go to the Container Registry details page and copy from the VPC link.

Paste the following YAML script onto the template and click Deploy.

Once it is successfully deployed, the new version of the deployment will be appeared on the Deployment list.

Go to the Pods section, there would be a new pod running. This new pod is based on the latest image with the version 2.0.

Use the terminal and type the below command, replace the URL of the endpoint with your IP address of the Load Balancer external endpoint. The URL can be found on the Container Service->Discovery and Load Balancing->Service.

The result will appear as below. The response would be the output from Pods that have different version of codes. This is because the load balancer is distributing the request to the Pods averagely. 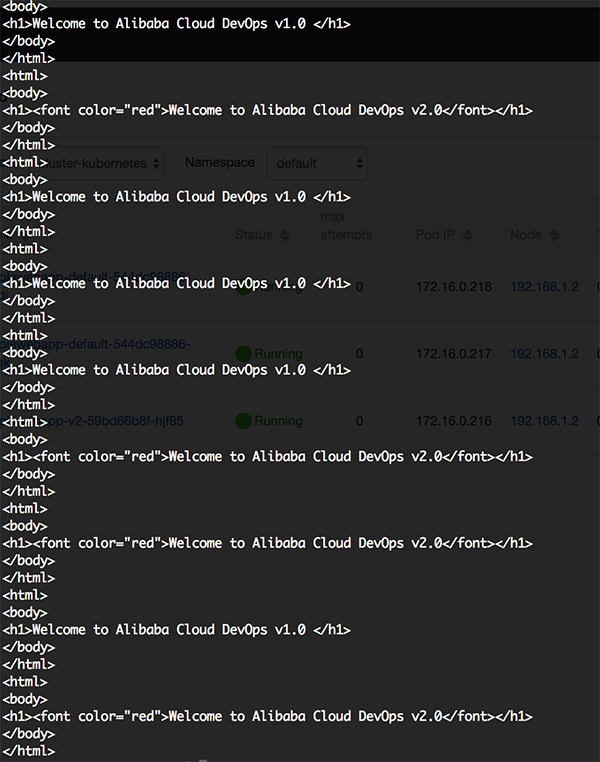 To distribute the load to the new image (2.0), you could increase the number of replicas on the deployment, to do this navigate to the Deployment. Click more->YAML to open up the YAML script file. Change the replicas attribute to more than 1, e.g. 10. Click update. 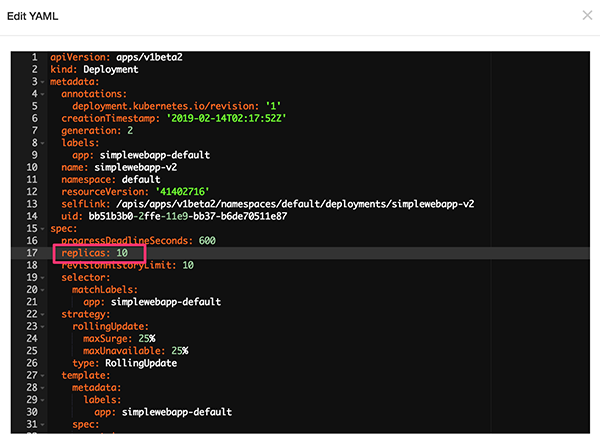 Check out the number of Pods, the new Pods based on version 2.0 would appear more than 1. 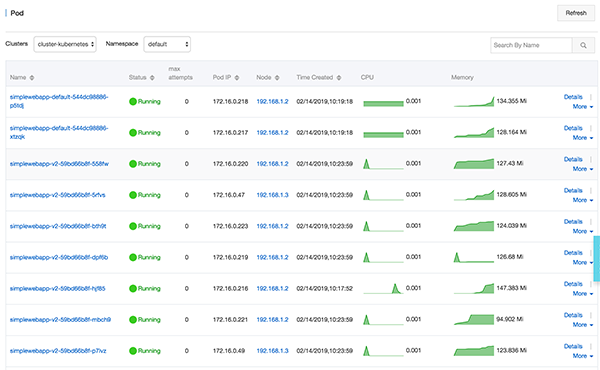 Go to the terminal and do another round of CURL command. There would be more responses output from the new Pods. 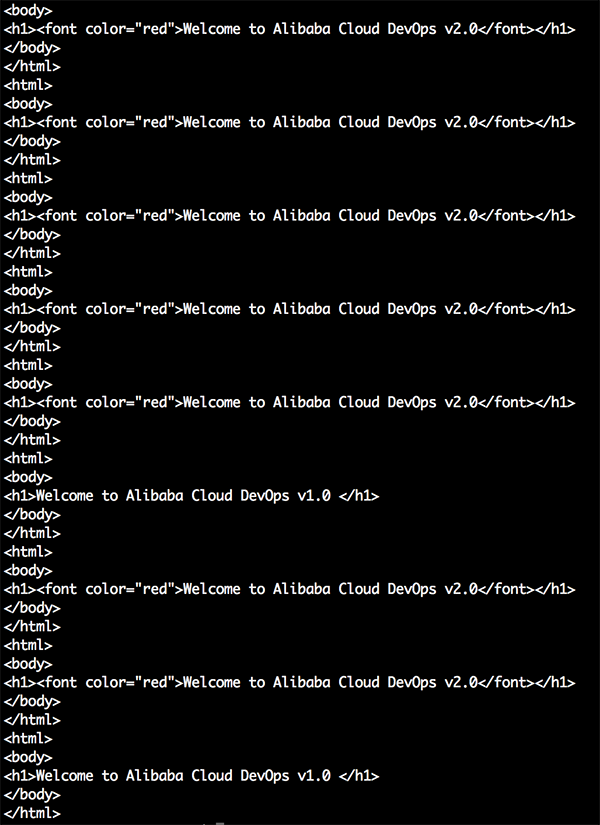 This section describes how to implement a gray release and a blue/green deployment by using the Ingress function provided by Alibaba Cloud Container Service for Kubernetes.

For example, assume that Service A already runs online to provide an externally accessible Layer-7 service, and a new version of this service with new features, namely, Service A', is developed. You want to release Service A', but you do not want it to directly replace Service A at once. Additionally, you want the client requests of which the request headers contain foo=bar or the cookies contain foo=bar to be forwarded to Service A'. Then, after Service A' has run without exceptions for a specified period, you want to reroute all traffic from Service A to Service A', and then smoothly bring Service A offline.

For example, assume that an earlier version of a service, named Service B, is running online to provide an externally accessible Layer-7 service. However, it has known problems. A new version, namely Service B' is developed with the problems fixed and you want to release this latest version. However, you initially want to reroute only 20% of all client traffic to Service B'. Then, after Service B' has run without exceptions for a period, you want to reroute all traffic from Service B to Service B', and then smoothly bring Service B offline. 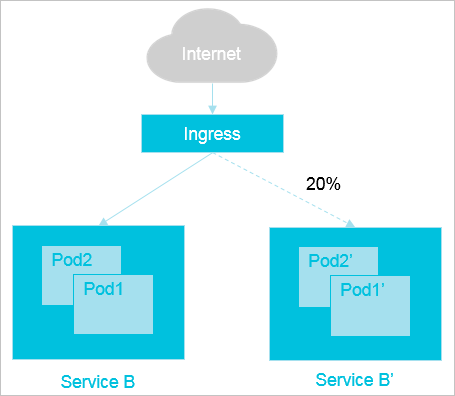 In a blue/green deployment

Before we create the ingress, first we would need to create two NodePort services for v1 and v2 respectively. Go to the Container Service->Service page and click Create button. Create another service for the version 2. 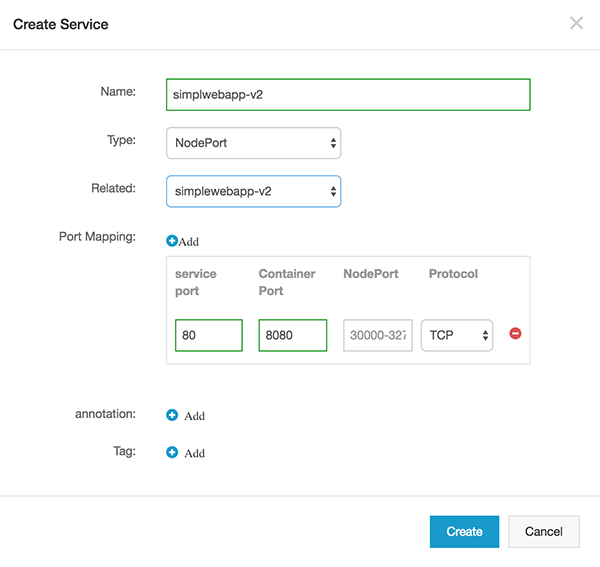 Navigate to Container Service->Ingress. Click on Create button to create a new ingress.

On the pop-up screen, key in the following details and click Create. 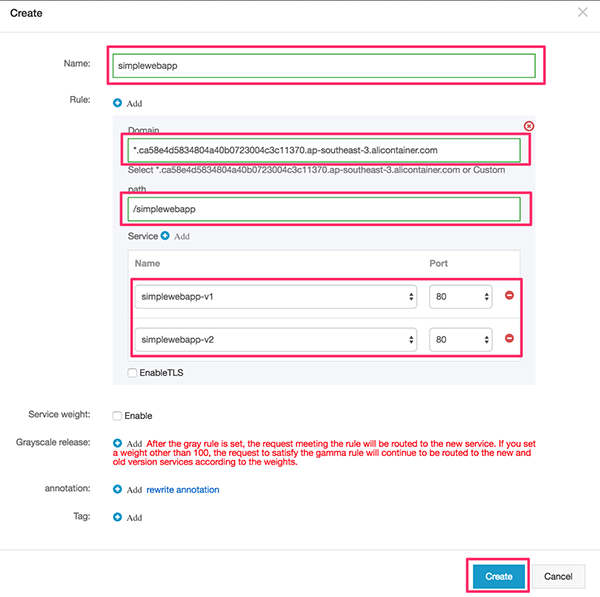 After the ingress is created, the new ingress should appear on the landing page as below

To view the website, simple copy the link on the rule, replace the * with the username that was used to activate the service earlier.

At this stage, even though there are two services created for this ingress but if the website is refreshed, it would only send the request to the version 1.0 application. This is because the service weight is not enabled. 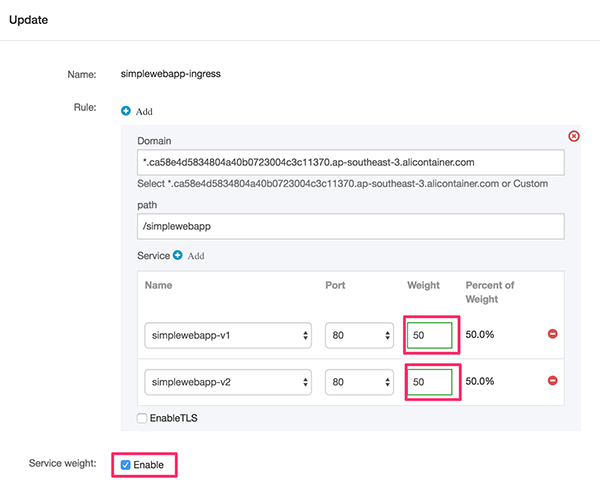 Now, the requests would be forwarded to the both version in a random manner. In ingress, you could also specify rules to match to a certain service. For e.g., if the query param matches the criteria, it will forward the request to the service.

Go back to the ingress page and click Update. On the pop-up dialog, add gray rule set, select the simplewebapp-v2 as the service, choose Query as type, choose Value match as matching rules and key in 2 as match value. 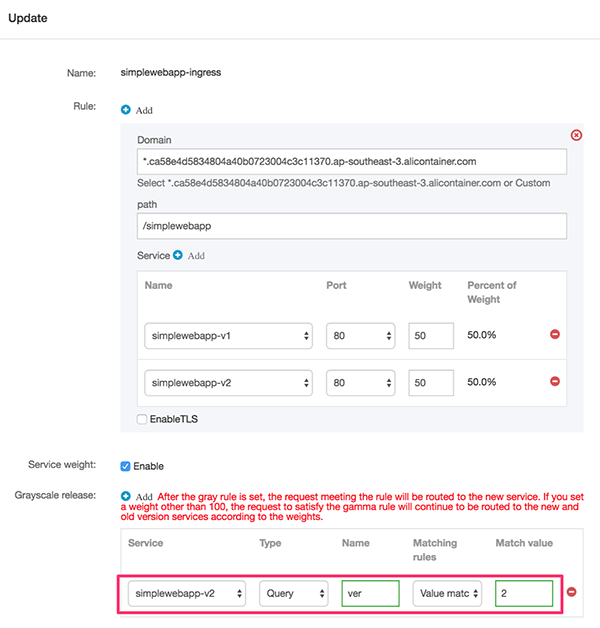