16,650 0
In this part of a two part tutorial series, you learn how to perform both spatial and non-spatial function queries on ApsaraDB for PostgreSQL.

In this second part of this two-part tutorial series, you're going to be performing both spatial and non-spatial function queries on Alibaba Cloud ApsaraDB for PostgreSQL you had populated in the first part of this series. If you haven't yet, you should check out the part one of this series to learn how before you proceed to the steps covered in this part. For this part of the tutorial, we will be using PostGIS preview that you first dealt with in part one.

For you to be able to complete this tutorial, you'll need to have the following items:

To perform both spatial and non-spatial function queries on ApsaraDB for PostgreSQL, complete the steps outlined in the following sections:

With our database populated, we will now develop our very first query. Before we can start applying spatial functions, it is important that we develop knowledge of using basic standard functions on PostgreSQL.

Let's work on the places table we had created. We'll see how many places qualify as towns. Apply this simple query:

You should have output that is something similar to this:

Note: If it doesn't work the first time, try reloading the page. We might also want to know how many places with a specific name exist. In our example we will check how many towns by the name bamba location actually exist:

You should get a similar result of only one town. We will not be going deeper into regular queries as we need to put PostGIS to the test and perform spatial queries

We will cover a few spatial functions and see how we can use them to extract data from our database. They are:

For geometry type returns the minimum 2D Cartesian distance between two geometries in projected units (spatial ref units). For geography type defaults to return the minimum geodesic distance between two geographies in meters. For example, POINT(-1.344165 51.381320) position is given in degrees. Another geographic reference system could use a different unit of measurement, such as meters or feet.

If we want to convert it from degrees to meters we will have to take the following into consideration:

Let's see how this works. We will find the distance between Kisian and Kajiado in degrees. Copy and paste the following query to postGIS preview:

You should have something similar to the image below:

Now let's try and convert the distance to meters. Type the following:

For geometry: The distance is specified in units defined by the spatial reference system of the geometries. For this function to make sense, the source geometries must both be of the same coordinate projection, having the same SRID.

For geography units are in meters and measurement is defaulted to use_spheroid=true, for faster check, use_spheroid=false to measure along sphere. 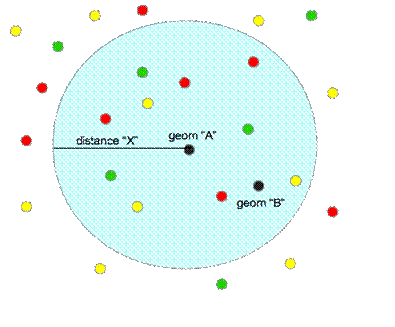 Let's see how it works:

You should have something similar to this:

And a table similar to this:

If a geometry or geography shares any portion of space, then they intersect. If this returns true, then the geometries also spatially intersect. Disjoint implies false for spatial intersection.

As an example we will check on the polygons that intersect with Nairobi, if any using the query below:

You should now be seeing something similar to this:

4. The ST_Within function (geometry A, geometry B)

The ST_Within spatial function simply returns true when Geometry A is completely inside B. Enter the query below:

The ST_Length function returns the length of a geometrical object if it's a line. The measurement is in the units of its spatial reference. In order to understand how it works we will try out an example.

Since we have no line geometry features, we will need to import them into our database. We will be using ogr2ogr, which is a ogr command line utility that converts one Ogr defined data source to another Ogr data source.

Using this simple command, beginning with the geojson file which we will name waterways:

Since we already have a table named waterways let's name this waterways and load the data by running the following command:

At the moment the geom column is named as wkb_geometry. We need to change it to geom in relation to PostGIS PrevieLoad GeoJSON data to Database using ogr2ogrw, which only accepts the geom column as geom.

Now we can perform st_length spatial function to find the length of Likoni river by running the following query:

There are other countless spatial functions that we have not gone through. You can check them out at PostGIS Documentation.

A bonus would be to learn how to load and generate rasters. As discussed in part 1, raster data model represents the world phenomena as cells of predefined, grid-shaped tessellation.

You could load existing raster files using raster2pgsql raster loader. Here is an example of how:

1.  First create a table to hold the new raster records

Now let take a second look at what we have all done in this tutorial: