Behind the Scenes with Alibaba Cloud's 8K Live Streaming

31,553 1
8K means much clearer visual experience. The huge pixels make each frame of the 8K video much clearer.

Alibaba Cloud released and presented the latest 8K webcast solution at the Computing Conference Shenzhen Summit on March 28, 2018. This is the first 8K video cloud solution released in the world and also the first 8K webcast in the world. We will discuss the details of 8K technology and learn how Alibaba Cloud realized the 8K live video broadcast in the following sections. 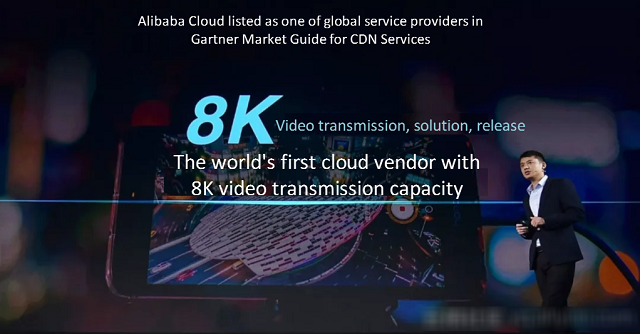 Picture clarity in the digital world is measured by the number of pixels. To put it simply, 8K means much clearer visual experience.

8K video, when integrated with video technologies such as 120 fps frame rate, high dynamic range (HDR), and wide color gamut (WCG) range, can appear realistic to the human eye. An 8K TV can provide a visual angle up to 100 degrees which is much higher than the 55 degrees of a 4K TV at the standard watching distance. Furthermore, with up to 22 audio channels, the 8K TV can provide users with immersive video experience and bring a strong sense of presence.

What Are the Applications of 8K?

In addition to the improved experience created by higher resolution, 8K video can make some new applications possible. New immersive video applications, such as panoramic video and virtual reality (AR/VR), follows readily from 8K, allowing the users to immerse in the verisimilar video scenario.

Besides for entertainment, 8K video can also be applied to real-life applications, such as remote healthcare and high-precision video monitoring. The large amount of information carried by the 8K video stream can replicate the information at a particular scene, making digital remote video applications possible.

This 8K live video broadcast is mainly based on the Alibaba Video Cloud solution. 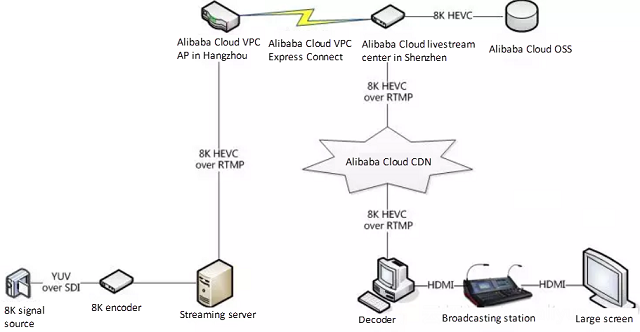 The image of the 8K ultra-high-definition live video has a resolution of 33 million pixels per frame. The original data volume of the video is up to 72 Gb/s. This requires the application of top hardware coding devices and coding chips.

In addition, the collected video and audio baseband data streams are synthesized into RTMP streams on the server and then pushed to the livestream center by using the independently developed stream pushing software of Alibaba Video Cloud.

Network transmission is the lifeline of webcast because a stable high-speed network is essential for high-quality and long-distance transmission of live video streams.

Alibaba Cloud has established livestream centers in Beijing, Shanghai, Shenzhen, and Singapore for live video broadcast, cloud recording, on-demand broadcast, and so on. Users can enjoy non-stop live videos through more than 1,300 nodes of Alibaba Cloud CDN across the world.

The Alibaba Cloud Express Connect between stwo livestream centers can provide good cross-region network connectivity on the cloud. With rich experience accumulated and system improvement in the process of live video broadcast of major events, Alibaba Cloud can apply whole-link real-time monitoring of the livestreams to timely identify and solve any choppy reasons. It is another challenge to ensure stable transmission of large data volume from Alibaba Hangzhou Xixi Park which is 1,300 km from the venue of the Computing Conference Shenzhen.

Strong capabilities at the video playback terminal is essential for users to enjoy the high-definition images and amazing experience from the 8K video. To ensure high quality of the 8K video, the 8K player independently developed by the Alibaba Video Cloud is used for the live video broadcast, which can realize code stream buffering and withstand network jitters. 8K playback requires strong decoding capabilities. The 8K video player independently developed by Alibaba Video Cloud has software decoding capability and supports GPU hardware decoding acceleration for monitoring and real-time decoding of the performance state on the rendering assembly line, ensuring a smooth watching experience.

To ensure smooth 8K streaming, Alibaba Cloud has launched Bare Metal Instance (X-Dragon) for high performance computing on the streaming server and in the livestream center.

Bare Metal Instance (X-Dragon) supports 96 cores and a maximum of 768 GB memory, which ensures smoothness and good experience as a streaming server. The X-Dragon Cloud Server carries Intel Xeon Platinum 8163 (Skylake) CPU and supports 96 vCPU, with instance computing performance 50% above the industry level. It adopts DDR4 memory to realize a memory data transmission rate up to 2666 MT/s and a memory bandwidth up to 128 GiB/s, satisfying the bandwidth requirement (72 Gbps) of 8K original materials and ensuring smooth watching experience. In addition, the X-Dragon Cloud Server supports up to 32 elastic network cards (ENIs) for establishment of highly available clusters, low-cost failover, refined network management, and so on, and supports high performance network of up to 4.5 million PPS, meeting the network performance requirements for key applications and eliminating packet loss at the source. Alibaba Cloud Storage Engine 2.0 was released last December. It provides Tb/s-level write capability and adopts multi-stream parallel mapping technology, allowing horizontal throughput scaling of the cloud disk. Therefore, the cloud disk has a throughput much higher than that of the physical disk.

The NASPlus storage products of Alibaba Cloud feature high IO and high scalability of the Cloud Storage Engine 2.0, and adopts the intelligent cache pre-reading technology at broadcast level, which greatly enhances the transcoding and non-linear programming capabilities. OSS seamlessly integrated with NASPlus is the most suitable low-cost and high-throughput storage for massive audios and videos. An express version was launched recently, which improves the performance by an order of magnitude.

On the morning of October 2, 1925, British scientist John Logie Baird saw the image of a puppet named Bill in his television system for the first time. This was the first time in human history to see the world through electric signals. At that time, most people thought that it is impossible to record the world with electric signals as the human had mastered electricity only for more than 30 years. Nearly 100 years later, Alibaba Cloud announced the arrival of 8K online live broadcast era with a screen displaying a Tao doll.

The development of science and technology broadens our world. It is only a few years past after the emergence of 4K display technology, but most have already forgotten the achievements of 4K and moved on to explore 8K technology. Now, as the 8K video technology emerges, new challenges will emerge in computing, storage, and network. However, with challenges comes opportunities. These problems have helped the team at Alibaba Cloud to develop and further improve the products, which in turn made the 8K live video solution possible.