Sentinel is an Alibaba open-source throttling component for distributed service architectures. Taking traffic as its breakout point, Sentinel helps developers ensure the stability of microservices in various ways, such as concurrency limiting, traffic shaping, circuit breaking, and adaptive system protection. Sentinel has supported core scenarios during Alibaba's Double 11 over the past ten years, such as flash sales, cold start, load shifting of messages, cluster throttling, and real-time circuit breaking of unavailable downstream services. It is a powerful tool to ensure highly available microservices and supports multiple programming languages, such as Java, Go, and C++. It also provides global throttling for Istio, Envoy, SOFA MOSN, and other service meshes to ensure reliability.

Sentinel Go 0.4.0 was officially released recently with the hot parameter throttling feature. It can automatically identify, count, and throttle "hot values" in input parameters. It is very useful in scenarios, such as click farming prevention and hot item access frequency control. It is oriented for highly available traffic. Next, let's look at the scenarios and principles of hot parameter throttling.

Traffic is random and unpredictable. We usually configure throttling rules for core APIs to prevent system crashes due to heavy traffic. However, common throttling rules are not enough in some scenarios. For example, a lot of popular items have extremely high transient page views (PVs) at peak hours during major promotions. Generally, we can predict some popular items and cache information about these requests. When there is a large number of PVs, product information can be returned quickly from a preloaded cache without accessing the database. However, a promotion may have some unexpected popular items whose information was not cached beforehand. When the number of PVs to these unexpected popular items increases abruptly, a large number of requests will be forwarded to the database. As a result, the database access speed will be slow, resource pools for common item requests will be occupied, and the system may crash. In this scenario, we can use the hot parameter throttling feature of Sentinel to automatically identify hot parameters and control the access QPS or concurrency of each hot value. This effectively prevents access requests with hot parameters from occupying normal scheduling resources. Let's take a look at another example. When we want to restrict the frequency at which each user calls an API, it is not a good idea to use the API name and userId as the tracking resource name. In this scenario, we can use WithArgs(xxx) to transmit the userId as a parameter to the API tracking point and configure hotspot rules to restrict the call frequency of each user. Sentinel also supports independent throttling of specific values for more precise traffic control.

Hot parameter throttling rules can be dynamically configured based on dynamic data sources just like other rules.

The RPC framework integration modules, such as Dubbo and gRPC, provided by Sentinel Go will automatically carry the list of parameters that RPC calls in the tracking points. We can configure hot parameter throttling rules for corresponding parameter positions. Currently, hot parameter throttling rules can only be configured for parameters of the primitive and character string types. In the future, the community will provide support for more types.

In scenarios that may involve abrupt increases in requests, such as consumption messages on the MQ client, we may not want to reject excessive messages but queue these messages for processing instead. This is a "load shifting" scenario. We can use constant speed + queuing in the Sentinel throttling rules to deal with this scenario. We can set a fixed interval for routing requests and queue excessive requests. This prevents the system from crashing when all requests are received or rejecting excessive requests. 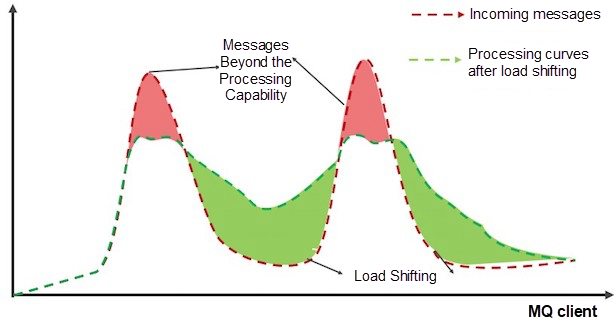