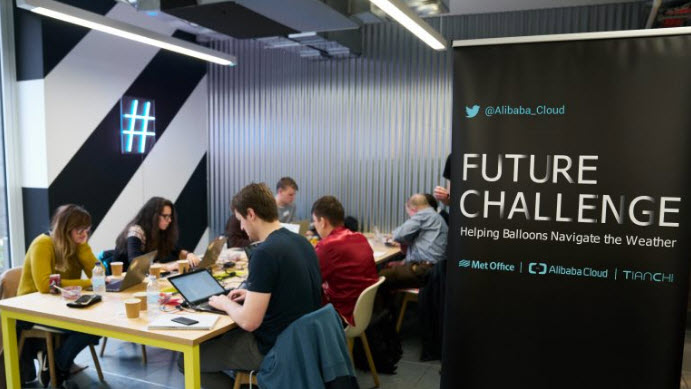 A casual observer may not equate food delivery in China with weather forecasts in the United Kingdom, but a new contest launched by Alibaba Cloud and the UK’s national weather service, the Met Office, does.

Contestants have been tasked with creating algorithms that generate effective delivery routes for anti-gravity balloons in the face of real-time changes in wind speed. The changes, while playing out above ground, are very similar to the real-time shifts in traffic flows faced by Chinese food-delivery companies on the ground.

Called the Future Challenge, the contest brings together students and professors from top UK universities, such as Exeter, Oxford and Cambridge, as well as researchers in the private sector. For Alibaba Cloud, it’s a chance to raise its profile in an all-important market.

Contestants in the Future Challenge where tasked with solving this problem.

“Europe boasts some of the best universities in the world, with highly talented professors and students working on complex data science and engineering problems,” said Yeming Wang, deputy general manager of Alibaba Cloud, who is based in London. “One of the aims of this project is to introduce Alibaba Cloud to these great minds, and work together with them on new challenges in the future,” he said.

The Alibaba Group business unit currently has offices in London, Paris and Frankfurt, while customers include Philips and Schneider Electric and Vodafone is a regional partner. Alibaba Cloud also has a data center in Germany.

The challenges faced by food-delivery companies, such as Alibaba Group-owned Ele.me, are real. In China’s hyper-competitive food-delivery space, the faster food arrives, the more likely they’ll retain that customer. To edge out the competition, Alibaba Cloud’s algorithms provide delivery drivers with the fastest routes to their customers in real time. Hence, the contest.

Here’s how it works: The contest is run on Alibaba Cloud’s crowd-intelligence platform, Tianchi. The platform has attracted over 120,000 data scientists from across 77 countries in disciplines ranging from data mining and artificial intelligence to machine learning and operational research. And they have collaborated online to solve real-world issues facing society at large. In a recent competition, 3,600 teams crunched data to find ways to minimize tollgate traffic jams in China’s often-congested cities.

For the Future Challenge, contestants must calculate the best routes for 10 different balloons to destinations across the UK over five days, taking into account wind speed, which could potentially destroy the balloons. The Met Office has delivered multiple wind-speed predictions that contestants use to calculate and approximate a consolidated hourly forecast on which to base their routes.

Alibaba Cloud last month went on a roadshow to three UK universities, Cambridge, Oxford and Exeter, where the Met Office is based, to drum up interest. It also held a hackathon, in London, where engineers from academia and the private sector worked on algorithms in preparation for the larger contest. Three winning teams took home cash prizes.

Wang said Alibaba Cloud wanted to put contestants in the shoes of the Met Office, using multiple predictions based on a large set of data, to work out an actual forecast. He called it a “true challenge,” and one with immediate relevance to the science of weather forecasting.

“While we are some way off balloon-based parcel delivery, it is not unthinkable that short-haul air logistics will happen in the future,” he said.

Moreover, the contest gives these engineers the chance to process a vast amount of data in a relative short space of time, a task that mirrors increasing demands in the market. The Met Office uses a supercomputer to track weather and climate conditions, computing a trillion operations per second and generate hundreds of petabytes of data a day on forecasts. Alibaba’s 11.11 Global Shopping Festival is another example, as it processed $25.3 billion worth of transactions in 24 hours and 325,000 orders a second at its peak.

“From an Alibaba Cloud perspective, this contest and data analytics have relevance across our portfolio,” Wang said. “We have solutions in place to help businesses with processing, visualising, exploring, analysing and integrating datasets in a secure and compliant way.”

The Future Challenge is currently in its semi-final stage, which lasts until Feb. 9. Three winners will be announced later this month and earn a trip to Mobile World Congress, in Barcelona. The top three winners receive $8,000, $5,000 and $3,000, respectively.

The Olympic Games on the Cloud