19,181 0
This article will illustrate how to implement haze prediction tool through the Alibaba Cloud Machine Learning Platform for Artificial Intelligence.

In today's top trending topics, you would most probably see air pollution in the list. In cities such as Beijing, it is not uncommon to see people wearing masks while walking in the streets. The haze not only affects people's travel and entertainment, but also causes significant harm to people's health. By analyzing the real weather data of Beijing over the past year, this article discovers that nitrogen dioxide is the most relevant pollutant with haze (i.e. PM 2.5), thus revealing the culprit for haze.

In this article, we will be creating a haze prediction model using the template from Alibaba Cloud Machine Learning Platform. Data source: Beijing weather index for the whole year of 2016.

The air index data for each hour since January 1, 2016 is collected. The detailed fields are as follows. The experiment process is as follows. 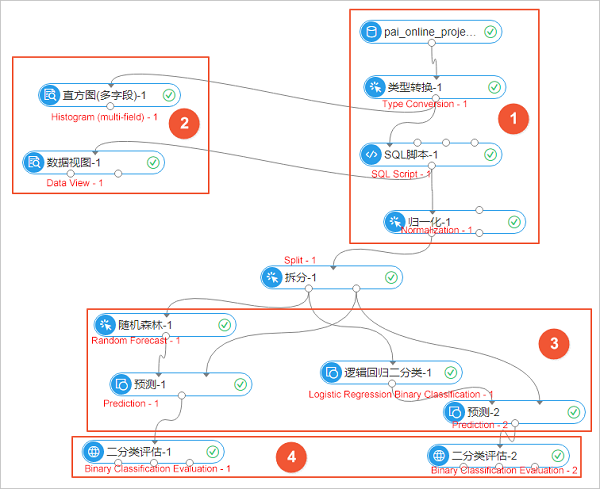 The entire experiment is divided into four parts:

The details are as follows. After the data is imported, right click the component and select View Data. The result is as follows. Convert string-type data to a double type through the "Type Conversion" component.

The main purpose of normalization is to remove the dimension, that is, to unify the units of pollutants with different indexes.

The Histogram component allows you to visually view the distribution of different data in different ranges.

This experiment visually presents the distribution of data in each field. As shown in the figure below, taking PM2.5 as an example, the most significant range of values is 11.74 to 15.61, with a total of 430 records. In this case, two different algorithms are used to predict and analyze the results: random forest and logistic regression.

The data set is split, in which 80% is used for model training, and 20% is used for prediction. Click Model on the left side of the console, select Saved Models. Right click the model, select View Model, then the tree model of the random forest is visually shown as follows.

The prediction result is as follows:

The AUC in the above figure is 0.99, which indicates that with the weather index data used in this document, it can predict whether there will be haze or not, and the accuracy rate can reach more than 90%.

A linear model can be obtained by training with the logistic regression algorithm, as shown in the following figure. The prediction result is as follows: Based on the model and prediction results above, the air index having the greatest impact on PM2.5 is analyzed.

The logistic regression model generated is shown as the following figure:

NO2 emission is often reported as one the main factors that creates PM2.5 pollutants. Our results are consistent with findings from the scientific community, which also indicate that NO2 is mainly from automobile exhaust emission.