At the China Electronic Information Technology Conference on April 21, the "Apsara Cloud Operating System Core Technology and Industrialization" project received the grand prize for scientific and technological advancement. Dr. Wang Jian, Chairman of the Alibaba Group Technical Committee, accepted the prize on behalf of the Apsara team. This is the first grand prize awarded since the awards was set up 15 years ago. This year's grand prize winners include Alibaba Cloud, Beihang University, and Tsinghua University.

"We already knew that a single server is not enough to meet computing requirements when Apsara was born 10 years ago. The first thing we did was to turn a data center into a high-capacity computer rather than a container of 10 thousand computers." Wang reviews the concepts developed when Apsara was born. "As an operating system of the data center, Apsara is the basic software necessary for cloud computing."

Apsara is an ultra-large-scale general operating system for computing independently developed by Alibaba Cloud to serve the world. The name Apsara is derived from a water goddess in Chinese ancient times with the hope of bringing happiness to people. The first employee was enrolled on October 24, 2008, and the first line of codes was written for Apsara by Alibaba Cloud engineers on February 1, 2009. Alibaba Cloud operating on Apsara is one of the world's top 3 and Asia's No. 1 cloud computing platform.

"When founding Alibaba Cloud many years ago, I worked with young people interested in ACM contests. The Apsara codes they developed make me realize that Alibaba Cloud is inseparable from young people. " says Wang recalling the inception of Apsara. "A group of people younger than 30 years old conceptualized Apsara from scratch and have improved it in the past 10 years by addressing key technical challenges." 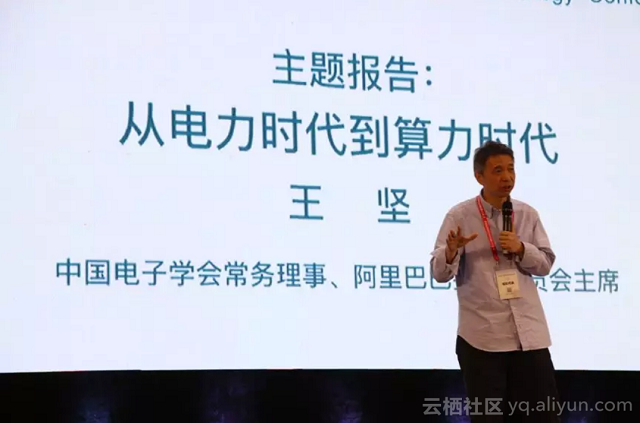 The New Age of Computing

At the meeting, Wang introduced the 2050 Conference to be held in Yunqi Town, Hangzhou from May 25 to May 27. "This is a gathering of young people who have contributed to the development of Apsara in the past 10 years."

The following is the full speech delivered by Dr. Wang, titled "From the Age of Electric Power to the Age of Computing Power."

Let me review the changes that occurred in the age of electric power and what the current situation is. In my opinion, electricity was invented long before it became an inseparable part of social development just over 100 years ago. After inventing the bulb, Thomas Edison continued to build a power grid on Pearl Street, New York, which completed the electric revolution. Why did such a big change occur from inventing the bulb to building a power grid though they both involve electricity? The bulb was the only electric appliance invented by Edison when he successfully generated electricity. The world saw enormous changes after refrigerators, washing machines, and other household appliances were invented with the wide use of electricity as the infrastructure and the power of industry. The age of electric power was deemed to start.

What changes have occurred until now? How was artificial intelligence born? In my opinion, the driving force behind all the things we see today, especially those with high values, is computing power instead of electric power. Let us think about it. We talk about artificial intelligence, big data, and other technologies with the assumption that computing power is everywhere. In other words, the computing infrastructure spreads to every corner of the world thanks to the Internet. Let us think more deeply. The deep-rooted change from the age of electric power to the age of computing power is also an important opportunity to us.

Let us return to the question why the Internet does not have the so-called first or second half, but only today's Internet companies have their first half and second half. The Internet we talk about today can be attributed to underground optical cables, which are the most elementary component. What is the implied meaning? The penetration of today's Internet has reached a pinnacle never reached by humans in the past, but is still limited because the Internet has yet to cover many parts of the Earth, including the vast oceans. America's attempt to build the next-generation Internet using satellites is a revolution surpassing the replacement of copper with optical cables.

A book I read proposes that the Internet emerged as early as when a copper cable for telegraphing spanned the Atlantic Ocean to connect America and England. The difference is the absence of the TCP protocol. The replacement of copper with optical cables is a big revolution, whereas the construction of the next-generation satellite-based Internet will turn the entire infrastructure upside down, apart from enabling Internet access on plane. A satellite-based Internet is unprecedented in the human history because it is able to cover every inch of the Earth, with influences far surpassing the replacement of copper with optical cables.

The reason why I talk about the transformation from electric power to computing power is that we can compute all the things that were not computed or deemed as computing objects in the past thanks to the full penetration of the Internet, which in turn will greatly boost computing power. Two or three years ago I proposed the idea of building a city brain with data as the new resource of city development. The computing power required to process all the data of the city brain is tens of thousands of or even several million times the total computing capacity we can image today. Sometimes we joke that our country will go broke if we process all the videos of a city.

Every household had a hard time deciding on 8- or 20-watt bulbs when I was a child. Electricity was a luxury back then. In a sense, computing power is still a luxury today because it has not brought the influences parallel to electricity in the Industrial Revolution. We are just beginning in this incredible age.

We developed the winning system after rethinking the meaning of cloud computing when everybody started talking about it 10 years ago. At that time we figured out three things not related to cloud computing:

The first thing is we were not developing cloud computing but the technology to turn a data center into a high-capacity computer rather than a container of hundreds or thousands of computers. Back then I considered Apsara as an operating system of the data center, the basic software necessary for cloud computing. Without it, cloud computing is merely a service. We went ahead with the special role of Apsara in mind.

The last thing concerns a deep-rooted starting point. The major difference between the Apsara operating system and the operating system of a computer is that the former shifts from products to services. In the dominance of software, an operating system is like a product installed on a computer. In the age of computing with the Internet as infrastructure, we need to turn computing into a service, not just encapsulating it into products. This is exactly what we did when developing Apsara.

Mr. Mei Hong mentioned a long journey, which can be interpreted as a negation of the so-called first half and second half. With deep feelings, I think about the role of the young people who developed Apsara. A group of people younger than 30 years old conceptualized Apsara from scratch and have improved it in the past 10 years by addressing key technical challenges.

I am glad that Alibaba Cloud, a big company, has developed Apsara in an unprecedentedly large system, which is a unified platform of storage and computing for structured and unstructured data, real-time computing, and batch processing. Apsara is the collective effort of young people over 10 years.

On May 25 and May 26, we will hold the 2050 Conference in Yunqi Town, Hangzhou. This is a gathering of young people who have contributed to the development of Apsara at their young ages. Many of them may not work at Alibaba now.

The problems and challenges facing us now are probably not seen in any places of the world. I have mentioned many times that the city brain resembles the Apollo program in the 1960s. It is the most complex system I can imagine, and its implementation requires intelligence and a computing power tens of thousands of times higher than that we have today. I believe we will have the opportunity to enter an age dominated by computing power in the next 5 or 10 years.

How to Synchronize RDS Data to a Local User-Defined Database