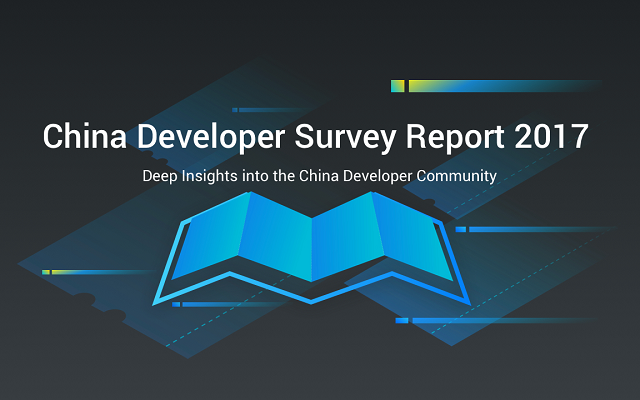 Ever wondered how developers in China differ from their international peers? Are you planning on starting a business in China? Or are you collaborating with China's technology experts? This report aims to shed light on the software developer community and research trends in China.

The China's Developer Survey Report 2017, commissioned by Alibaba Cloud Developer Community (ACDC) and funded by Alibaba Cloud Research Center, surveyed over 7,032 developers in Mainland China. In this report, developers shared their preferences for software development, including their favorite OS, development environment, programming language, database, framework, and codebase. Among other things, you can find out about China's software development trends and practices in fields such as cloud computing, big data, artificial intelligence, blockchain, and security.

Read on to discover the top 25 trends of developers in China.

1. Windows is still the favorite OS

67.2% of developers prefer Windows, 20.3% prefer MacOS (OS X), while only 12.5% prefer Linux or other operating systems (OS). Some of the main motivations of using Windows include the familiarity of the OS and the availability of platform resources in China.

2. JavaScript is the most widely used development language

While SQL is the most popular development language worldwide, developers in China still prefer JavaScript and Java. Developers proficient in Java and Python paid significantly higher than peers.

3. WordPress and Discuz! are the top web applications used by web developers

Owing to the popularity of blogs and forums in Mainland China, Discuz! and WordPress are the heavy favorites among web developers. The developer community in China is heavily male dominated, with only 7.9% of developers are female. This number is slightly higher than the global average of 88.6% (2017 Stack Overflow Global Developer Survey).

5. Beijing is the most popular city for developers, followed by Hangzhou

Hangzhou, with the presence of Internet giants such as Alibaba, has transformed from being a fairly unpopular city to the second most preferred city for developers in China.

6. Front-end engineering is the most important skill for front-end developers

7. Eclipse is the most popular development environment

8. MySQL is the most widely adopted database

The “Open Source” nature of MySQL makes it a popular choice among developers compared with more traditional databases such as SQL Server. Oracle is also a popular option, but its adoption is hampered by its price tag.

9. There is no preferred cloud deployment model among developers in China

Private, public, and hybrid cloud are all of equal importance in China. Instead of having preference on a single deployment model, developers in China focus on the coexistence of multiple alternatives for different applications.

10. Being a developer pays well in China

In China, there are no concrete distinctions between enterprise and social communication tools. Developers prefer to use social IM tools, such as DingTalk, QQ, and WeChat, as their primary communication tool. DingTalk users tend to be those from higher income levels.

Hadoop HDFS offline storage and Hbase online storage are two popular alternatives to relational databases for data storage. More and more enterprises in China are embracing Big Data and its technologies, specifically in the IoT, finance, and e-commerce industries. 13. Developers in China are a relatively young workforce

A majority (56.7%) of developers in China have only 0-3 years of work experience. This suggests that the developer community in China is less experienced as compared with international peers (42% have 3-10 years of experience).

14. Computer vision, NLP, and voice recognition are the three hottest topics in AI among China's developers

Developers in China are facing a multitude of challenges when dealing with neuro-linguistic programming (NLP) and voice recognition. These challenges stem from the complex structure of the Chinese language, as well as limited resources for voice data.

15. 71.8% of China's developers have Bachelor's degree or higher

This result suggests that China's developer are better educated than their global peers on average. According to the 2017 Stack Overflow Global Developer Survey, only 56.6% of developers globally have bachelor or higher degrees.

Similar to developers from around the world, Node.js, AngularJS, and .NET Core are the three most preferred application framework and codebase in China.

17. React Native is the leading cross-platform solution for mobile development

From food delivery to bike renting, mobile applications have become a necessity in China. For mobile developers, React Native and jQuery Mobile are the two most popular cross-platform solutions in China.

18. GitHub is the preferred repository for source code

When teamwork is required, China's developers would first choose Git (45.9%) as the version management tool, while SVN (38.9%) comes second.

20. Agile development is widely adopted by developers in China

21. Ethereum is the most widely used blockchain product

Ethereum is popular among China's developers because it is open source and provides good support for new developers. Because Bitcoin transactions is suspended in China (as of 2018), many developers are still exploring other possibilities of using blockchain as a service.

22. Continuous integration is still not widely adopted in China

As many as 49.5% of developers have never used any development integration management tools. However, there is also a significant minority (31.8%) of developers who use Jenkins to automate software development processes.

23. Security is a big concern for developers in China

70% of developers in China are well aware of the importance of security for enterprises, with a strong emphasis on invasion detection and loophole scanning. However, enterprises in China do not invest enough on security. 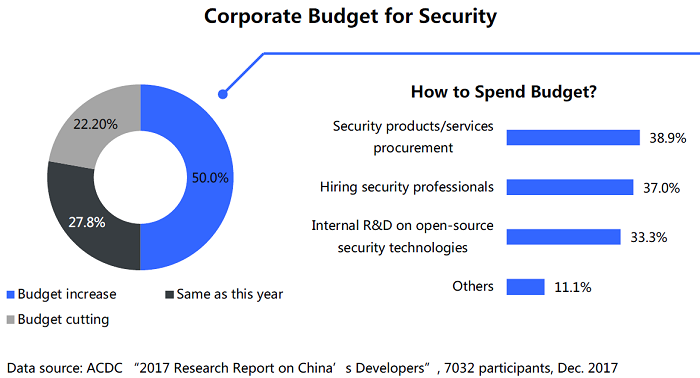 In China, 52.7% of developers are working on web development-related projects. Emerging fields such as Big Data, cloud computing, and security are still in great need for experienced developers.

25. …and finally, China's developers are in many ways similar to their international counterparts

From denim jeans to generic brand T-shirts, the go-to attire for China's developers is pretty similar with developers from across the globe. Furthermore, the vast majority of developers in China are self-proclaimed introverts and have close affinity for computer games.

Good one. But I think exploring more to see what best fits is better :)